Mankind To Pollute Oceans with Water-Scrapers 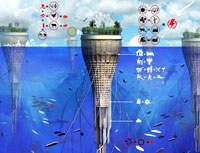 Mankind To Pollute Oceans with Water-Scrapers

As a rule, the participants of the competition design buildings of unusual shape. This year’s most impressive work differed a lot from all previous standards.

Sarkum’s water-scraper can be as tall as the respectable Empire State Building in New York. His building “grows” in the opposite direction: only a couple of floors can be seen above the water surface, and the rest of the building goes deep under the water.

The hO2+scraper is a floating, self-sufficient and ecologically safe project. The underwater building can house thousands of people, supply them with food and produce its own electric power.

It generates its own electricity using wave, wind, and solar power and it produces its own food through farming, aquaculture, and hydroponic techniques. The surface of the submerged skyscraper sustains a small forest, while the lower levels contain spaces for its inhabitants to live and work. The building is kept upright using a system of ballasts aided by a set of squid-like tentacles that generate kinetic energy.

The architects “envision a future where land as a resource will be scarce; it is only natural progression that we create our own. Approximately 71% of the Earth’s surface is ocean, even more if climate change has its way, hence it is only natural progression that we will populate the seas someday.” As anyone who has seen Waterworld will attest, it’s a grim future indeed - which is why it’s essential that we do what we can to stem the course of the world’s rising tides.

The project exists only on paper, but it may become real some day. It is not ruled out that we will soon have many underwater cities. This could be a very good solution for the human civilization especially when we reach the overpopulation crisis.