NASA scientist Richard Gross claims that the massive 8.8. magnitude Chile earthquake on February 27 may have shifted the Earth’s axis by as much as 8 cm (3 inches) which would be enough to shorten the length of day. 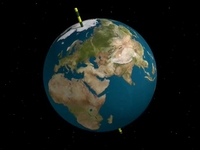 According to NASA website, using a computerised model modeling the earth’s rotation, Richard Gross of NASA’s Jet Propulsion Laboratory, Pasadena, California, estimated that the figure axis upon which the Earth’s mass is balanced could have been shifted by the Chile quake, the fifth largest in history, by 2.7 milliarcseconds, equivalent to 8 cm or 3 inches. This occurred because a portion of the earth’s core collapsed swiftly and massively, altering the planet’s equilibrium.

This, in turn, he claims would shorten the length of day by 1.26 microseconds, or 1.26 millionths of a second because the Earth’s rotation would have been speeded up. For Gross, the Chilean quake is likely to have had an even greater effect on the Earth’s figure axis than the larger Sumatra earthquake of 2004 (9.1 on the Richter scale) because the epicentre was located further away from the equator and nearer the mid-latitudes (having a greater lateral effect) and due to the fact that the Chilean fault line (the Nasca Plate) goes deeper down into the Earth’s core.

Furthermore, the Chilean earthquake was the thust-type (with an inward pull) as opposed to the strike-slip type which has a horizontal pull.

Several other effects can lengthen or shorten the day (and these effects are never permanent), namely lunar tidal pulls and volcanic eruptions. Another study published today (Woods Hole Oceanographic Institution, Massachusetts) reports that the Chilean quake could have been the tail-end of the 1960 9.5-magnitude quake, the result of a stress build-up.