A Canadian researcher managed to take a picture of the face of the legendary hairy giant – the mascot of the Winter Olympic Games 2010. 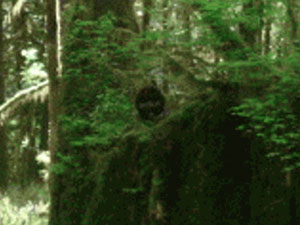 Randy Brisson, a well-known Canadian cryptozoologist, shared hot information with his Russian colleagues. The researcher sent a photograph of the North American Bigfoot to Igor Burtsev and Dmitry Bayanov, the directors of the International Center for Hominology. The Canadian took the picture of the creature in Vancouver, the capital of Winter Games 2010.

Brisson assured his Russian colleagues that it was a photo of the legendary Bigfoot, or Sasquatch. The popularity of the mythical creature has won it the honor to become a symbol and a mascot of Winter Olympics in Vancouver. Mr. Brisson’s photo may mean that the mascots ramble somewhere in the woods of the Olympic city.

The Canadian cryptozoologist said that he had seen a Sasquatch peeking out from behind a huge stub in the woods near Pitt Lake. The spot, where the creature was supposedly photographed, is quite far from sports objects.

Randy and his son Ray found big tracks on the snow along a hauling road. The footprints were quite big – it was obvious that they had been left by an adult creature. There were smaller footprints found nearby too.

The toes on the feet of both the adult and the youngster were pathologically angled to one side. The researcher claimed that the creatures were breeding since he had found the footprints of both a parent and a baby.

Mr. Brisson also said in his message to the Russian researchers that he and his son decided not to trace the couple because the creatures, when trying to escape, were throwing rocks at them.

The story may sound very strange, but Burtsev and Bayanov said that they had never exposed the Canadian of any falsifications in their studies of the unknown.