Specialists of the Russian Research Center for Space Systems are completing the tests of a unique engine based on new physical principles to obtain propulsive power, Itar-Tass reports. 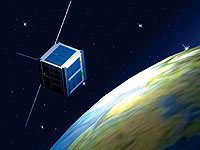 The engine, which does not emit reaction mass, was installed at Yubileiny satellite, which was launched into orbit in May of 2008. The engine, which operates both autonomously and remotely, allows the satellite to move from one orbit to another.

“Our engine is now the last working element on the platform of Yubileiny satellite,” a spokesman for the research center said.

The scientist rejected the information which said that the developers of the unique engine had spent millions of rubles from the Russian budget on the development of the new system.

“If we had had 200-300 thousand rubles, we would have conducted the experiment on a completely different level to receive much more interesting results,” the scientist added.

The current tests have revealed a number of problems, which the scientists will need to solve to improve the work of the new device. In general, the Russian scientists are satisfied with the results of the experiment conducted on Earth’s orbit.

They originally intended to test the new type of engine on the International Space Station, but it was later decided to install it on a satellite for a more pure experiment.

The movement takes place as a liquid or solid body moves on a tornado-shaped trajectory. The engine will last for at least 15 years and can be activated nearly 300,000 times during the operation period. The engine is powered with solar batteries.

The untraditional engine was tested on Earth too. Russia’s Space Corporation Roskosmos supported the project. Once the tests are completed, the new engine will be used to control orbits of spacecraft and orbital stations. It can also be used during spacewalks.