Russian astrologists are skeptical about predictions of an apocalypse that is to happen in 2012 according to the Maya calendar. Yet, they do think that new war conflicts are possible. 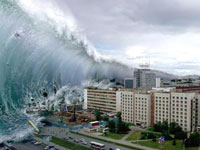 “We cannot speak about the apocalypse, but it could be a crisis of consciousness for the Maya descendants,” said Pavel Globa, a popular Russian astrologist at a round table in Moscow on Tuesday. “ The issue of the apocalypse is in our minds. I’m not that familiar with the Maya calendar, but if it is accepted, it works on a level of the absolute unconscious. You have to remember, however, that the calendar is not a primary thing, “Interfax cited Globa’s words.

According to the Maya calendar, in 2012 we will be completing the Fifth Sun and entering the Sixth Sun. This transition is associated with the end of the modern history of mankind.

“In terms of cosmic cycles, 2012 is no different than 2010, yet it might be an interesting year for Russia. In the fall of 2012 Saturn will enter Scorpio and within the period between September 2008 and October 8, a large cross will shape in the sky. This cross may mark a breaking point when issues associated with wars are possible, “the astrologist said.

He provided empirical evidence and analogies. In particular, he mentioned that in the end of the 15 century, everyone was waiting for an apocalypse that was to happen in 1497, and in the fall of 1498 Columbus discovered America.

Another participant of the round table, Michael Levin, provost of the Academy of Astrology, also noted that “the calendar is secondary in terms of Earth’s time.” As for the crisis of consciousness predicted for 2012, the astrologist suggested that it lasts for thousands of years and usually goes unnoticed.

"Years 2012, and 2017 through 2020, are a new crop on earth, and I am not expecting any global changes in the history of mankind. We will reap the results in thousands of years,” Levin said. He brought the history on Christianity as an example. “Thousands of years ago the Great Roman Empire should have looked at Judaea more closely. At that time no one knew that the new religion will spread all over the world and that the Roman Empire was to collapse,” he said.

According to the Maya calendar which is based on the periods of 394 years known as baktuns, the 13th baktun is completed on December 21, 2012. The number of 13 is sacred for the Maya. The calendar shows that the time ends that day.

Besides, in 1960s, the so called Monument Six was found in Mexico. The monument represented stone plates with text saying that in 2012 something involving Bolon Yookte K, god of War and Xibalbá, was to happen. The end of the inscription is barely readable because of erosion and cracks. An archeologist suggested that the text goes something like “Bolon Yookte K will come down from the sky.”

Various Western interpreters linked the prediction with a series of astronomical events to happen in 2012. During winter solstice in 2012, the Sun will be on the same line with the center of the Milky Way for the first time in 26 thousand years. They believe it means that the flow of energy coming to Earth from the center of Milky Way will be disrupted 12.21.12 at 11:11 pm.

This theory is “propped” with the fact that there were many talented astronomers among ancient Maya. Yet, many scientists still doubt that they could know about relative position of the planets and place so much emphasis on it.