A sheep gave birth to a dead lamb with a human-like face. The animal was born in a village not far from the city of Izmir, Turkey. 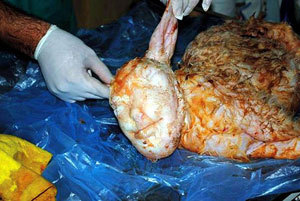 Erhan Elibol, a vet, performed Cesarean section on the animal to take the lamb out, but was horrified to see that the features of the lamb’s snout bore a striking resemblance to a human face.

“I’ve seen mutations with cows and sheep before. I’ve seen a one-eyed lamb, a two-headed lamb, a five-legged lamb. But when I saw this youngster I could not believe my eyes. His mother could not deliver him so I had to help the animal,” the 29-year-old veterinary said.

The lamb’s head had human features on – the eyes, the nose and the mouth – only the ears were those of a sheep.

Veterinaries said that the rare mutation most likely occurred as a result of improper nutrition since the fodder for the lamb’s mother was abundant with vitamin A, CNNTurk.com reports.

In Zimbabwe, a goat gave birth to a similar youngster in September 2009. The mutant baby born with a human-like head stayed alive for several hours until the frightened village residents killed him.

The governor of the province where the ugly goat was born said that the little goat was the fruit of unnatural relationship between the female goat and a man.

"This incident is very shocking. It is my first time to see such an evil thing. It is really embarrassing," he reportedly said. "The head belongs to a man while the body is that of a goat. This is evident that an adult human being was responsible. Evil powers caused this person to lose self control. We often hear cases of human beings who commit bestiality but this is the first time for such an act to produce a product with human features," he added.

The mutant creature was hairless. Local residents said that even dogs were afraid to approach the bizarre animal.

The locals burnt the body of the little goat, and biologists had no chance to study the rare mutation.