When modern science becomes a victim of the tabloid press or sensational media eager to keep the adrenalin fix flowing to maintain their readers and viewers on a rollercoaster high of gasps and spasms…Today’s story is the impending destruction of Earth from an exploding supernova. But is T Pyxidis really a foe? 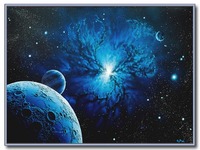 Sky News started Thursday with a scare story to follow the extreme weather story. After all, a few inches of snow is hardly the end of the world. What would Russia do if it came to a standstill every winter?

So the snow story has morphed into the star T Pyxidis “primed” to go bang in a blast so powerful, it “could wipe out the Earth” story. Says who? “American astronomers”. Sky News, which accompanied the Iraq war live with questions to American soldiers of the type “Hey, you guys! So you’re looking for some revenge for 9/11?” continues on its website:

“It is set to self-destruct in an explosion called a supernova” and “It is much closer than previously thought” and “the blast from the thermonuclear explosion could strip away the Earth’s ozone layer”. Wow!

However, where does hysteria end and science start? Where does Sky end and where does News start? And when does Sky become News?

The “doomsday scenario” predicted by Sky News, delivered by “American astronomers” was in fact a paper delivered by Edward Sion, Professor of Astronomy and Physics at Villanova University, at the American Astronomical Society yesterday, in which he stated that T Pyxidis, in the constellation Pyxis, is in fact 3,260 and not 6,000 light years away.

5,878,630,000,000 miles (multiply that by 3,260) and given that the star “might” turn into a supernova in ten million years’ time, according to Professor Sion, it is hardly the cataclismic heart-stopping “whopper” Sky started the day with.

What in fact happens is that T Pyxidis, a white dwarf, gathers gas from another neighbouring star, builds up to a critical mass and emits a burst of energy. The first known burst was identified to have been 1890, then there were others in 1902, 1920, 1944 and 1967.

The rest is pure conjecture. While some scientists doubt that T Pyxidis will ever build up to a supernova at all, the “Armageddon theory” is based on the premise that if – we repeat, if – not enough matter is expelled during the bursts, then the mass could build up to pass the Chandrasekhar limit of 1.4 times the mass of the Sun and turn into a Type 1a Supernova.

Could it not be true that the world is becoming more violent and children are becoming less focused and more distracted because they are fed a daily fix of violent images with ever-increasing adrenalin rushes? Could it not be that if everyone calmed down a bit and, for instance, reported science stories with scientific fact and not sci-fi “Alien vs. Predator” style hype that people would be happier and the world a better place?