Russia To Send Asteroid Apophis Back into Deep Black Space

Russia’s Federal Space Agency Roscosmos will start working on a project to save planet Earth from the collision with Asteroid Apophis, which, as scientists predict, may happen in 2036. 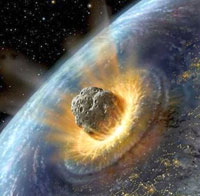 Russia To Send Asteroid Apophis Back into Deep Black Space

Anatoly Perminov, the head of Roscomos, said in an interview with the Voice of Russia Radio Station that the flight trajectory of the massive asteroid was gradually approaching the Earth. A scientist, who shared the information with Mr. Perminov, also told the official that Apophis was three times as large as the legendary Tunguska Meteorite.

NASA specialists, though, believe that the collision is extremely unlikely.

“I don’t remember exactly, but it seems that by 2032 Apophis will ram into Earth,” Perminov said.

As a matter of fact, Apophis will be flying in close vicinity to Earth in 2036.

Mr. Perminov also said that his organization had already received a number of projects to break the flight path of the asteroid. The head of Roscosmos said that it could be possible to build a special purpose spaceship which would allow to avoid the collision and preserve the asteroid without any nuclear explosions.

Russian specialists will choose the strategy to save planet Earth from Apophis and then invite world’s leading space agencies to join the project.

Asteroid Apophis, named in honor of the Ancient Egyptian God of Chaos, was discovered in 2004. The asteroid is expected to near Earth several times from 2029 to 2036.

NASA scientists initially said that the asteroid posed a serious danger to the Earth, but they later revised their predictions.

Additional observations provided improved predictions that eliminated the possibility of an impact on Earth or the Moon in 2029. However, a possibility remains that during the 2029 close encounter with Earth, Apophis will pass through a gravitational keyhole, a precise region in space no more than about 600 meters across, that would set up a future impact on April 13, 2036.

Additional observations of the trajectory of Apophis revealed the keyhole will likely be missed and on August 5, 2006 Apophis was lowered to a Level 0 on the Torino Scale. As of October 7, 2009, the impact probability for April 13, 2036, is calculated as 1 in 250,000. An additional impact date in 2037 was also identified; the impact probability for that encounter is calculated as 1 in 12.3 million.

Anatoly Perminov also shared his thoughts about future flights to the Moon and Mars.

“I am certain that man will fly to Mars, but it will happen after a manned mission to the moon. It will most likely happen in 2032,” the official said. “I know that the European Space Agency, the USA and Russia have different perspectives in their space research programs. I know that the ESA is concentrated on a mission to Mars, whereas Roscosmos and NASA are busy with lunar exploration programs,” Perminov added.

Perminov also said that in 2010 Russia would be prepared to become fully accountable for the transport support of the International Space Station.

“Russia is prepared to execute this goal. We have been cooperating with NASA for two years on this subject and we finally signed the agreements stipulating the delivery of astronauts to the ISS on board Russian Soyuz booster rockets,” Perminov said.