Copenhagen: The Case of the Attempted Climate Coup

Denmark’s abominable handling of the Climate Summit has been clear to all: the Nazi-style repression of peaceful demonstrators, the Nazi-style suspension of the Conference on its last day and subsequent re-opening at 3 a.m. of December 19 after many delegations had gone home and not one single concrete step being taken to reduce GEG emissions. Washington, however, is at least sitting at the meeting table these days. 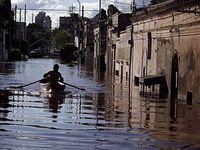 Copenhagen: The Case of the Attempted Climate Coup

One could say that the record number of limousines rented in Denmark’s capital city over the past two weeks contributed far more towards climate change than the conference itself. Far more disturbing still, was the decision by the Danish Government to suspend the Conference on its last day and restrict the word to President Obama of the USA and 16 chosen guests, while the representatives of 170 UN Member-States were denied the right to speak and told to sit quiet and listen.

Furthermore, in the sidelines of the Conference, Lars Rasmussen (the Prime Minister of Denmark), the representatives of the 27 EU members and those of the United States of America, had been chiselling out an agreement to which those from the developing countries had been denied access. For Fidel Castro, in his article The Truth of What Happened at the Copenhagen Summit, “It was an antidemocratic and practically clandestine initiative that disregarded the thousands of representatives of social movements, scientific and religious institutions and other participants in the Summit”.

Now the coup de grace. After many of the delegations had gone home, at 3.00 in the morning of December 19, the Prime Minister of Denmark re-opened the Summit which he chaired, convening a meeting to conclude its works, trying to pass an agreement that had been reached exclusively by the clique of nations centred on the EU-US axis. When this was blocked by Cuba, ALBA and the G-77 countries, the Chair of the meeting then attempted to coerce countries which had been excluded from the secret agreement to sign up to it, trying to pass it off as enjoying widespread acceptance, gaining a legally binding status which would then shape further talks.

However, the developing nations did not accept this imperious imposition from above, conducted in secret, without being presented to the Convention, the kind of anti-democratic skulduggery typical of European Union bureaucrats. Venezuela’s Claudia Salerno beat the table so hard during her impassioned delivery that it started bleeding. Cuba, Venezuela, Bolivia and the G-77, represented in Copenhagen by Sudan, rendered the attempted climate coup void and left the Putsch of the clique of elitists in tatters.

After a heated few hours, they refused to ratify an agreement which would have been the death of Kyoto with nothing to replace it, which allowed for an increase in temperature of 2 per cent (when 1.5 is enough to swamp low-lying countries) and which did nothing towards guaranteeing a 45% reduction in GEG by 2020 and 80 to 90% by 2050.

What the G77 expected to see was a firm commitment by industrialised countries to such levels of GEG reduction plus a fund to allow developing countries to transform their industries. This was not produced and therefore Rasmussen’s attempt to bask in the limelight after his abominable handling of the Conference failed as miserably as the Conference itself.

Nothing was achieved. The Failed Coup of Copenhagen will enter the annals of history as the worst kind of example of the selfish traits of Humanity, the type of approach which would rather the species ceased to exist than make a personal sacrifice.

Perhaps the only positive note is that the United States of America is these days very much on board and is beginning to take a real interest in the issue of green energies and GEG reduction. The fact that the USA is involved along with other industrialised nations in the setting up of an annual 100-billion dollar fund to finance industrial transformation in developing nations could be seen as the first step of the way to Mexico, where this climate change circus convenes again in 2010.

Let us hope that this time, there is a more open handling of the discussions, a more democratic debating process, less high-handedness, less skulking around in secret meetings with hidden documents. After all, we are supposed to be one united world.