Science fiction fans are well aware of the idea that there are civilizations on other planets of our galaxy. One of the most anticipated science fiction movies about interplanetary colonization made by the legendary James Cameron (Titanic, Aliens, The Terminator: Dawn of Fate ) will hit theaters in December. Cameron’s Avatar describes an attempt of Earthmen to capture the planet of Pandora to use its natural resources. The question that arises is whether a real Pandora exists and if yes, then when are we going to travel there? 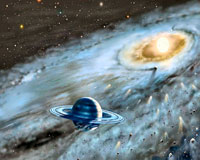 It is not surprising that lately scientists are increasingly more interested in studying this issue. Environmental conditions worsen every year, climate is rapidly changing, natural resources are getting exhausted, and there is a prospect of a nuclear war.

However, Earth is the only planet in our planetary system that has the atmosphere chemistry, temperature, and other components suitable for life. Even the atmosphere on Pandora in Avatar movie is too toxic for humans, and the main character is forced to use a genetically designed body – avatar – to travel there.

Astrophysicists and astrobiologists from all over the world propose theories about interplanetary migration and study all possible options. Even famous professor Stephen Hawking once said that for the sake of survival, humanity should move further into space.

Today, there are four leading planets among potential “Pandoras” known to media: the Moon, Mars, Europa (one of Jupiter’s satellites) and Gliese 581 d, the least explored and the furthest planet.

Distance from Earth: 384 000 km (1.25 seconds at the speed of light)
Atmosphere composition: no atmosphere
Temperature of surface: sharp changes from +130° С до -170° С
Force of gravity: 6 times smaller than that of Earth
Water: until recently it was assumed that there was no water on the Moon . In November 2009, NASA, found almost 100 liters of water on the Moon.

The Moon is the most logical and popular cosmic body where Earthmen can create their first colonies. Three years ago, NASA announced that in 2020, the Moon would house the first American colony. In 2008, professor Hawking suggested in his speech at the NASA 50-year anniversary that it could happen in 30 years, i.e., in 2038.

Distance from Earth: varies depending on orbital position of planets, with minimum 56, 000 000 km (almost 10 minutes at at the speed of light)
Atmosphere composition: 95% carbon dioxide, 3% nitrogen, 1.6% argon and a small amount of oxygen
Temperature of surface: varies from +20° С to -140° С
Force of gravity: 3 times smaller than that of Earth
Water: present, in the form of ice

In October of 2008, Abel Méndez, Associate Professor of the University of Puerto Rico, presented his Quantitative Habitability Theory to assess the current state of terrestrial habitability on all known planets and satellites. According to his theory, Mars and Europa are the most suitable cosmic bodies. Professor Hawking also believes that Earthmen will be able to hang out on Mars in as little as fifty years. He admits that since there were suitable atmosphere and water on Mars several billion years ago, there could have been life as well. Now water can be found on Mars only in polar regions, but it could be used for the first colonies as a potential source of oxygen.

Distance from Earth: the distance from Earth to Jupiter varies, and the distance between Jupiter and Europa is 670,000 km, which means that Europa is 588, 670 000 km from Earth (not much more than 30 minutes at the speed of light)
Atmosphere composition: small amount of oxygen not sufficient for humans
Temperature of surface: -200° С
Force of gravity: 7 times smaller than that of Earth
Water: the entire surface is covered with ice

Probably the most romantic of all the candidates, Europa is the sixth satellite of Jupiter and was discovered by Galileo Galilei in 1610. Richard Greenberg , Professor of Planetary Sciences at the University of Arizona, the author of the book Unmasking Europa, and member of numerous NASA research programs, said in one of his interviews that life could be found on the very surface of Europa, not under the ice.

Distance from Earth: approximately 189 trillion km (20 years at the speed of light)
Atmosphere composition: possibly contains carbon dioxide
Temperature of surface: the greenhouse effect may facilitate the existence of water in liquid form
Force of gravity: 2 times bigger than that of Earth
Water: the entire surface is possibly covered with water

Gliese 581d is the farthest and most mystical “Pandora.” The planet is located in the constellation of Libra and rotates around the star Gliese 581, hence its name. It was discovered in April 2007 by the team of Stéphane Udry of the Geneva Observatory in Switzerland. Members of the networking website Bebo sent radio message to the planet due to arrive in the Gliese 581 system's vicinity by the year 2029.