In Russia, about 44 percent of citizens throw their food out after it becomes too late to eat it. About 37 percent feed excessive food to pets, ten percent try to eat bad food anyway, and about two percent of Russians give away the food that they don’t need to those in need. 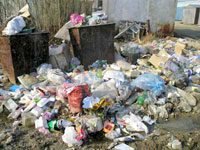 Moscow’s Food Resources Department said that the daily consumption of food in the city in 2008 was measured at 32,500 tons, which made 11.68 million tons a year. Therefore, about a quarter of the purchased food finds itself in garbage bags in Russia’s capital – over 23 percent.

In Britain, the situation is similar. About 5.3 million tons of food evaluated at 12 billion pounds sterling ($20 billion) is utilized in Britain annually, The Guardian wrote with reference to a new report from Wrap agency.

Liquid food – milk, soups, soft drinks – make most of food garbage. A British family throws out 480 pounds every year, and the figure grows to 680 pounds a year in case there are children in a family.

Wrap’s experts previously said that one-tenth of all discharged foodstuffs is quite edible. People do not even unpack about 60 percent of the food that they throw out as garbage.

The food and Agriculture Organization of the United Nations said that the number of undernourished people in the world had increased to 1 billion by October of the outgoing year. Most of these people live in developing states.

The production of food has to be increased by 70 percent by 2050 to feed the planet’s population. Otherwise, the UN said, mankind will have to face massive hunger.