On October 22, Microsoft’s newest Windows 7 hit retail shelves in Russia and the rest of the world. RBC News had a chance to try the new Windows prior to its official launch. 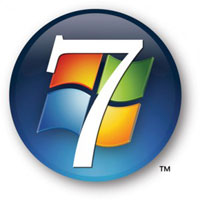 The demand for Vista, launched in the beginning of 2007, leaves much to be desired. Vista set a high bar for the computer performance required to run the operating system, which caused many problems from the onset. Even consumers who know little about computers developed certain apprehension towards laptops with pre-installed Vista. Only a few people cared about the fact that modern computers had enough capacity to run Vista. Therefore, the number one issue at the moment is the ability of Windows 7 to rehabilitate new Microsoft OS in the eyes of the users. Windows 7 was designed to become an advanced version of the more successful Windows XP.

Windows 7 will fire up very quickly. A laptop with a maximum version of Windows 7 is starts up within a minute.

Windows 7 desktop is very user-friendly and is not overloaded with graphics. Word and Excel open instantly, while it takes a while for the Internet Explorer or a photo album to open.

The new wallpaper collection is bright but eye-pleasing. There is a customization option that allows choosing the background, windows’ color and sound effects with a click of a mouse. The wallpaper changes throughout the day every time you turn your computer on, which is a nice surprise.

The windows are thought out to the smallest detail. They are easy to navigate, and the number of open windows does not affect memory, unlike XP or Vista.

Microsoft claims that Windows 7 will work 20% longer than Vista due to the new balance of performance and energy consumption.

Windows 7 motto is “simplification of common tasks.” A task of connecting a computer to the Internet proved that the motto was true. We tried connecting through a modem and the system was satisfied with the modem driver designed for Windows XP. The connection was fast. Windows 7 developers claim that the Local Area Network is very simple and intuitive and can be set up with three clicks of a mouse. However, all other computer in the network should have Windows 7 installed.

It is obvious that the developers of the new OS were haunted by XP success. Programs written for XP can run on Windows 7. It is fun to see the old OS operating in a separate window.

Windows 7 has another extremely important option, the Windows Error Reporting. If you are going to install the program but not sure how your computer will like it and whether you can install proper settings, all you need to do is to open Problem Steps Recorder. Then you press a button “Start Recording” and all your steps will be reflected as screen shots. If everything works as you planned – great, if not, you can go back and look at the records.

Those who have children will enjoy expanded options for creating limitations for games, software and time spent at a computer. The new options will work provided that your child logs in as him/herself and does not know your password.

Finally, it is important that Windows 7 has a good potential since it supports multisensory data entry and recognizes Cyrillic without any extra steps. It is premature to talk about the demand for these features at the moment, but it will likely change in a couple of years.

There are also new desktop gadgets, new pre-installed games, and new coding options. The system has a plethora on new interesting features, and the first encounter showed Windows 7 to be beautiful, intuitive and more functional OS than its predecessors.