Lately dozens of reports come from Israel saying that a mermaid-like creature was seen near the town of Kiryat Yam in the Haifa Bay. Witnesses say that it looks like a young girl with a fish tail. The creature usually appears at sunset, performs various tricks and disappears in the sea. 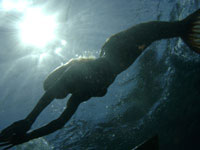 The town’s Mayor Office offered 1$ million for the evidence of the creature’s existence. An original photo would be sufficient to receive the money.

First sightings of mermaids or mermaid-like creatures appeared a long time ago. In old times people used to say that mermaids enticed strangers to come into the water and drown; that they made people hallucinate; and that mermaids helped those they liked and destroyed those they didn’t like.

Supposedly, mermaids can be seen on a moonlit night when they play in the water and laugh. They say that some nights mermaids turn into regular young women, get out of the water and dance.

There is a story that one of the residents of the Transdniestr region, while fishing, found a woman with a fish tail on the sand. The woman was approximately 5 feet tall, white, with greenish weed-like hair, a beautiful face and eyes without pupils. The guy took the mermaid to his house where she died shortly. After that the man began experiencing hallucinations.

The man’s neighbors also saw the dead mermaid in his house. Two days later the fisherman buried her in the woods, and his hallucinations stopped.

A few years ago a resident of Saint Petersburg, Florida, found a weird dead creature on a remote beach. The mermaid’s body (the man was convinced it was a mermaid) was sold at an online auction for $1,550.

Advertising his lot, the man said that the creature was most likely a link between fish and mammals. It probably died trapped in toxic seaweed.

One of the website visitors mentioned that the monster was simply a sculpture made by an American artist Juan Cabana of a real fish skeleton and fish scales.

Another evidence of mermaids’ existence was provided by a Russian singer Vyacheslav Yeskov. While fishing with his friend in Belarus, Yeskov caught something extremely large. He was expecting to see a big fish but couldn’t drag it out of the water. With the help of his friend he managed to get it out of the water for a second. However, it wasn’t a fish but a half-fish, half-human creature about 5 feet long. The fishermen didn’t get a chance to take a good look at it since they fell out of the boat.

The issue of mermaids’ existence remains open. They might be some unknown creatures that people mistake for mermaids. Maybe sooner or later the puzzle will be solved. Now the residents of the Israeli town rush to the beach with their cameras every night in the hope of taking a picture and winning the prize. However, journalists think that the fuss about the phenomenon is only a PR trick designed to attract tourists.