It is a well-known fact that 70 percent of identical twins, even if they were separated at childhood, often share each other’s fate, even if it’s criminal. Investigators often come across situations that seem unbelievable. While interrogating a murderer whose brother has been imprisoned for five years, they hear a crime story identical to the one of his relative. Is it genetics or is it upbringing? Or perhaps it’s the most dangerous kind, as Dr. Cesare Lombroso, a pioneer of criminal phrenology, believes (phrenology is a theory stating that criminal traits of a person can be derived from the shape of the skull). 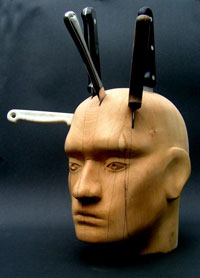 “Humans are the only species that constantly commits mass murders”, says Victor Yagodinsky, M.D. Some calculations show that at least 14 billion people died in 14,000 wars. Limitless cruelty widely demonstrated by mankind has no analogies in the world of higher animals. Yet, at the same time, it’s surprisingly comparable with behaviors typical for creatures incapable of rational thinking - insects, fish, and even primitive organisms like bacteria and viruses. Homo sapiens act no more rational than spiders placed in a jar.”

Professor Boris Porshnev suggested an interesting concept of Homo sapien development. He believes that mankind in its development went through a scary stage of adelphophagy, which literally means “eating one’s brother.” This means that the history of mankind started from cannibalism, predatism, unnaturally aimed at the representatives of the same species. Heterogeneity of species appeared only with the development of civilization.

So far only 10 percent of the world population belongs to this type of predatory humans. The majority of population belongs to two nonpredatory types that are characterized by rejection of violence. “Diffusive” type includes people who are easy to influence. “ Neoanthropes” are those who don’t easily fall under the influence of others, have high virtues and self-critical thinking.

Representatives of this type have one significant drawback. They can easily adopt slogans and ideas of “predatory humans,” follow them and become an uncontrollable crowd ready to crush and break everything around. Cruelty is contagious, and there are facts to prove it.

According to statistics, in the early 1990s two murders an hour were committed. Today, someone is murdered every 16 minutes. The number of crimes (including economic, political and criminal acts) grows 10 percent a year. It means that in about 10 years the world would turn into a criminal group. The fear of being hurt by another human being grows among people every day. Can we fight aggression?

Of course, we can feel sorry for two-legged “predators” who were unlucky to be born with unhealthy genes. We can feel sorry for them when we see them on TV or read about them in a newspaper. But when we come across them face to face in a dark alley or happen to be held hostage by them at a Nord-Ost performance, genetic engineering for eliminating these people seems to be an insufficient measure. All you want to do is grab a machine gun. But when this idea enters your head you involuntarily start thinking – who am I? Am I a “diffusive” type who can be easily angered or a “superanimal” with a monstrous mindset?

“People with genetic peculiarities demonstrate psychological complex of “supermen” and “superwomen.” For some unknown reason, these people have a double chromosome. For example, men typically have XY chromosome, and the majority of serial killers have XYY chromosome. Women with criminal inclinations have XXX chromosome. Their blood also contains more hormones that enhance aggressive behavior – testosterone, adrenalin, estrogen, and progesterone. Therefore, people with “antisocial” diseases can be modified through genetic engineering. Theoretic programs already exist. These programs suggest that special tests can be used to identify people who are incapable of murder under any circumstances. Scientists could decode their genetic programs, clone a normal gene and inject it into the cells of an ill body where it will replace a mutated gene. This theory was confirmed in Cleveland, USA, where scientists injected fight dogs with toy dogs’ genes.

“Aggression can be re-directed. For example, aggressive people could take up difficult sports like diving or mountain climbing. Psychologists and psychoanalysts could use special trainings to help people suffering from insufficient release of psychological tension.