Is there life on Mars? Mankind started looking for an answer to this question in 1976, after the publication of the iconic photo depicting something that looked like a human face on the surface of Mars. Many said that the Face on Mars was only a pile of rocks, some explained the photo with light tricks, but the origin of the face still remains a secret. There are scientists who say that it could probably be a message from an ancient civilization, which may have existed before or still exists underneath the surface of Mars. 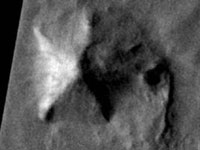 Powerful telescopes from a spacecraft orbiting Mars have found new evidence to prove the existence of life on Mars. Telescopes took pictures of nine pyramids on the surface of Mars. The pyramids, as it seems, are not of the natural origin. The images include striking statues of human and animal faces, clearly visible from space, as well as large drawings featuring the profiles of primates and canines.

Andrew Basiago, the president of Mars Anomaly Research Society, named the discovery ‘A New Cydonia.’ The scientist believes that there were three civilizations on Mars, one of which was hidden underneath the planet’s surface.

The scientist previously said that the pictures, taken by Spirit rover, contained images of five primate species, one of which he named ‘Sendak.’ Basiago is certain that Mars used to be a home for a highly-developed civilization. However, a space catastrophe, which supposedly hit the planet about 11,500 years ago, destroyed nearly everything on the Red Planet, as well as Atlantis on Earth. Some of the Martians, the scientist believes, moved to Earth afterwards.