Among the contracts negotiated in August at t he MAKS International Aviation and Space Salon there was an agreement signed by the Russian Federal Space Agency (Roscosmos) and the German Aerospace Center (DLR). The contract details the creation of the Orbital Astrophysics Observatory Spectrum-X-Gamma (SXG) planned to be launched in 2012. 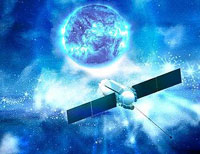 According to Mikhail Pavlinsky, deputy head of the Space Research Institute (SPI), the total project cost nears €50 million. Under the agreement, Germany will provide the main of the two X-ray telescopes, while Russia will install it on its platform, prepare the spacecraft, and take care of all related issues. Russia will also install an additional telescope on this platform.

“I do not know any other examples of collaboration in space research on such a large scale,” Pavlinsky stated in an interview with the Nezavisimaya Gazeta. “It is the first time ever when a Western country is providing Russia with such an expensive device. Before, the collaboration was limited to launching their devices from our platforms.”

The project is unique not only because of its participants and large scale, but also because of its tasks and possible discoveries. The project will be looking for galaxies, not stars. When it comes to discovering further galaxies, even the telescopes brought beyond the Earth’s atmosphere are sometimes blind when compared to X-ray telescopes. Space is permeated by dust and at times it takes hard for X-rays to get through it. The new observatory will help scientists perform an all-sky scan survey.

To be fair, such survey has been already performed in 1990-1991 under the ROSAT project (Germany, the USA, and Great Britain). At that time the scan was preformed with soft X-rays, and sensitivity was 40 times less. The work of the SXG is expected to result in a discovery of about 100,000 new galaxy clusters and over 3 million of new active galaxy nuclei that possibly have supermassive black holes in their centers.

“Our project is fundamental for science,” Mikhail Pavlinsky says. “We are currently trying to understand dark matter and dark energy. To find the answers, we should study the large scale structure of the Universe. Galaxy clusters are the largest objects. Their number, spatial distribution and mass depend on the role of dark energy in their formation. Our observatory will be able to give more specific answers to these questions. These answers will help us improve our understanding of dark energy,” Pavlinsky stated.

The story of the project is long and somewhat sad. It’s not surprising taking into account that it started in the 1990s, when Russia had no money for space research. According to Pavlinsky, the project had different goals at the time. However, it is irrelevant since it was shut down due to the lack of funding. The project revival began in the fall of 2004 when scientists started a discussion about a possible installation of a German space device on the Russian platform. It took five years of discussions and revisions to turn the project into a full-blooded mission with a unique goal. To this day, none of the existing observatories has managed to reach this goal.

During the mission the space device will perform a gravity-assisted maneuver near the Moon and then will reach the so-called Lagrange point L2 located 1.5 million kilometers behind Earth. L2 is one of the five Lagrange points of the Earth-Sun system where disturbing gravitational actions are minimized. No spacecraft has ever “stepped” on L2 point. Here the all-sky X-ray survey will commence. The survey will be performed by the main X-ray device of the German e ROSITA observatory and the additional hard X-ray Russian device ART-XC. The mission is expected to take seven years.