Fisherman Valery from Russia’s Southern Urals was catching fish in a small lake about 40 kilometers far from the city of Chelyabinsk. The man was fishing sitting in his boat. It was a very quiet morning, and the man was very sleepy. All of a sudden, he saw a fish net in the bulrushes. 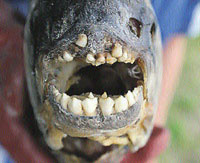 Valery decided to pull the net out of the water. There was several dead fish in it, but one of them, which was quite large in size, was alive. The shape of its body and head was very unusual. The man tried to get the fish out of the net, but was horrified to see that the fish had a row of white strong teeth in its mouth. The teeth of the fish bore a striking resemblance to those of a human being.

The man left his catch on the lakeside and hurried to return home. He came back the next day – the fish was dead. He decided to bring the fish home and show it to his friends.

The fisherman placed the weird fish under a thick layer of salt to dry the creature out.

“I hope it will attract scientists’ attention before it finally decomposes,” he said.

Local ichthyologists said that it was most likely a bigmouth buffalo, also known as Ictiobus. This species used to be cultivated in the region during the 1980s. However, when specialists saw pictures of the fish, they could only shrug their shoulders.

A similar fish with human-like teeth was caught not so long ago in Texas. The catch weighed 6.5 kilos. Scientists said that it was a pacu, a piranha, which normally inhabits South America.

Russian ichthyologists believe that the caught fish does not represent a mutation. Such a mutation would take hundreds of years. However, they have no other explanation for this strange phenomenon.

Drone attack on Iranian military facility may lead to unpredictable consequences
20:16
Meter over Krasnoyarsk: Locals report their houses shaking
19:02
The West lives to fulfil the precepts of Madeleine Albright and George Soros
16:33
The West prepares army to invade Russia
15:39
Russian troops take control of another town in Donetsk People's Republic
14:43
Over 9,000 illegally mobilised Russians return home
13:58
Israel and USA brewing another major conflict in the Middle East
20:22
Sarmat ICBMs and Borei submarines to make Russian Army one of the world's strongest
19:22
Russia shuts down US and German military and biological programs in Ukraine
16:13
Croatian president: The West takes immoral position on Ukraine
15:37
Russian forces take advantageous positions in Vuhledar
РусскийDeutschFrançaisPortuguese