Massive pieces of ice may fall from the sky in sunny weather, not matter how bizarre that may seem. Frozen blocks can be bigger than the largest hailstones - some of them may weigh several dozens of kilograms. 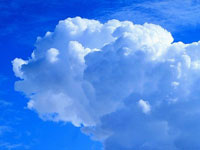 The phenomenon of ice falling down on the ground out of the blue sky is a mystery, just like the UFO. The difference makes only the fact that this phenomenon has been proved real. Modern science does not have an explanation to the phenomenon, although experts say that falling ice was the reason for the Airbus jetliner crash over the Atlantic Ocean.

A big research team from Spain and the USA studying this problem for ten years has collected evidence of several hundreds ice “bombings” which have been observed worldwide. Several photos of ice bombs, so-called megacryometeorites, have been taken.

In Portugal, a piece of ice weighing 20 kilograms rammed into a house. In Florida it smashed a car. In India it killed an elephant. In Germany (in Düsseldorf) ice “spear” 2 meter length stitched a person. The heaviest of the registered ice blocks weighed 35 kilograms – it fell down in a Palestinian village.

The phenomenon was several times observed in Russia, although a long time long ago - in 1984 and 1996. The most recent ice bombings were reported in 2009 in Spain, Italy and the USA.

Scientists originally believed that ice blocks were the frozen contents of plane toilets. However, when scientists analyzed some of the fallen blocks, they found no specific traces of urine, faeces or disinfectant liquid.

Questioning the air traffic control officers also showed that at the moment of ice bombings there were no planes flying over the territories where ice fell.

Scientists also rejected the version saying that the blocks could be the fragments of comet ice as laboratory tests showed that ice of the megacryometeorites had characteristic features of the regular earthly hail.

If a plane finds itself in the zone of abnormal ice formation, the plane can be quickly covered with a thick layer of ice and eventually crash. The US Bombardier Dash 8 Q400, bound for Buffalo, might have crashed for that reason on February 12, 2009. The pilots of the plane only managed to report the abnormal and sudden icing.

If an ice block crosses the plane’s path at the speed of a hundred meters per second it will instantly destroy the jet. This might have been the reason of the Airbus А -330-200 crash, though it still remains a secret. The black box of the plane recorded only the icing of the speed sensor. Perhaps it was the first sign of the imminent tragedy.