Drilling for the Planet's Secrets at Mt. Elbrus 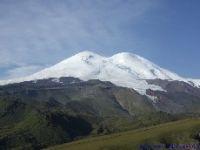 Drilling for the Planet's Secrets at Mt. Elbrus

Russian scientists will start the first ever high-altitude ice drilling at Mt. Elbrus in order to collect core samples for further studies of the composition of our planet’s ancient atmosphere.

Ice drilling at the site is the first of such experiments in high altitude regions. The scientists will drill at a height of 5150 meters. This is 500 meters lower than the highest point of Mt. Elbrus. The project will take two weeks.

After completion, the samples will be sent to several laboratories. The air trapped in ice during its formation will be studied. These studies are of interest because they will reveal how the concentration of carbon dioxide changed in the Earth’s atmosphere with time.