Planet Saturn has a prominent system of rings, consisting mostly of ice particles with a smaller amount of rocky debris and dust. NASA’s Cassini spacecraft has recently discovered new objects and strange shadows on the rings. 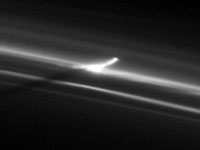 The unusual objects were detected due to a sharp angle of sunlight cast on the rings. Cassini captured the object shaped as a tower on the outside edge of the F ring.

The shadow cast by the object implies that it is protruding upwards for about 2 kilometers. The object is a little bit inclined that’s why the scientists called it the Tower of Pisa.

However, the object has nothing in common with real towers. By the astronomers’ opinion, the object appeared after a cosmic body, an asteroid or a big meteorite, passed through the ring.

The ‘tower’ can be clearly visible with the aided eye now, due to the advantageous sunlight. This happens once in 15 years. Moreover, this object is not unique. The scientists spotted similar objects on other rings.

Earlier Cassini captured a strange shadow cast on the Saturn rings, though quickly found the source. The shadow was cast by the inner moon of Saturn, Mimas (about 396 kilometers in diameter), NASA said.