The plants-infesting fungi produce a blend of hydrocarbons, the chemical compound of which is very reminiscent to that of diesel fuel. Scientists hope that they will be able to split off adequate genes in the DNA of the fungi, to implant the genes in microorganisms and to process wood substance to fuel. 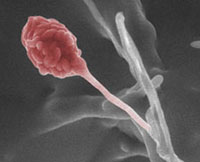 High prices on oil and gas make developed countries of the world look for alternative sources of power. The world already uses nuclear, tidal and wind-powered plants to generate electric power, although it is impossible to make billions of cars in the world consume electricity instead of gas. Electromobiles can at the very least be used in cities, but not for long-distance travel or agricultural activities.

The ethanol-based alternative fuel, which is produced from corn or sugar cane, does not solve the problem either, since the production of one liter of ethanol requires the same amount of raw hydrocarbons.

Now there is a hope that the problem will be solved with the help of microscopic parasitic fungi which live inside wood substance and break up cellulose producing a hydrocarbon blend. The wood cellulose holds best perspectives for the production of fuel, but it is extremely difficult to break up its strong structure – special enzymes are required for the process.

It turns out that Gliocladium roseum fungi infesting eucryphia South African shrubs possess the required qualities. When breaking up cellulose, the fungi produce such hydrocarbons as decane, 4-methylcyclohexane, undecane, octane and benzol. The chemical compound of this blend is very close to diesel fuel and can successfully be used instead of it.

Montana-based researchers, who made the discovery, realize that the tiny quality of diesel fuel, which the fungi produce, will not be enough to power even one tractor. However, it is possible to conduct a genetic analysis, detect the adequate genes and implant them into microorganisms to be able to produce diesel fuel from wood in industrial qualities.