German Girl With Half-Empty Skull Sees Normally Through One Eye

A 10-year-old German girl born with the left hemisphere of her brain is able to see normally through one eye. 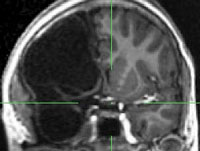 German Girl With Half-Empty Skull Sees Normally Through One Eye

The scans on the German girl, known as AH, showed that she had no right cerebral hemisphere which failed to develop for some inexplicable reason. A big part of her skull is just empty, computer tomography showed. However, the girl is witty, charming, and intelligent and takes part in physical activities such as roller-skating.

The girl’s phenomenon and her ability to see everything very well with only one eye struck many scientists all over the world.

Normally nerve fibers carry visual information from the right eye to the left hemisphere and vice versa. This explains the essence of the left and right fields of vision.

The girl’s right eye, that would send the information to the left hemisphere, does not function. The left eye would communicate with the right hemisphere, but the girl does not have that side of the brain. The youngster, from Germany, has both fields of vision in one eye only. Scientists say that there is no other phenomenon like that anywhere in the world.

Dr Lars Muckli from the University of Glasgow with his German colleagues who led the study, said: “This study has revealed the surprising flexibility of the brain when it comes to self-organizing mechanisms for forming visual maps.”

The research showed that contrary to the laws of nature the nerve fibers that should go to the right hemisphere of the brain diverted to the left.

Brain even developed a special zone to receive the signals.

Scientists would like to detect how new nerve maps appeared in brain. If they manage to disclose this secret, doctors would be able to cure the patients after cerebrovascular accidents and injuries.