USA Prepares to Conquer Moon Again, While Russia Works on Projects of the Past

Some way or other, the greatest space achievement for the time being has been the Moon landing, but it happened as far back as forty years. 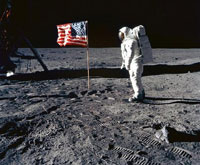 USA Prepares to Conquer Moon Again, While Russia Works on Projects of the Past

The greatest impetus for Apollo project was the hurt national pride, as the first round of the space race was won by the USSR. America invested money not in the Moon exploration project, but in the national spirit uplift. When Armstrong and Aldrin landed on the Moon on June 20th, 1969, they managed to do it.

Besides, more than 700 technologies were designed for Appollo. Velcro fasteners, teflon, orthopedic mattresses, magnetic-resonance tomographs and even Miramistin, the antiseptic liquid, were invented for Apollo project. The goal was accomplished. In spite of the fact that it cost $24 billion, the influence of the lunar missions is perceptible in the U.S.A. even now.

Nowadays, the U.S.A. needs new space achievements. The only possible variant is to proceed with the Moon exploration.

The most experienced NASA astronaut, Michael Foale, said that we had no detailed information about the Moon. The astronauts had landed on six locations on the Moon, but it was insufficient. To understand the Moon, humans need to build research bases there, like as in the Antarctic Region.

NASA has started to develop a new lunar transport system, while the ISS maintenance is now a duty of Russia.

As early as 2015 the USA plans to construct new spacecraft, Orion, designed to transport the human explorers to and from the Moon.

As for Russia, the nation’s all production facilities are engaged in manufacturing obsolete Soyuz booster rockets and spacecraft. Russia normally manufactured two spacecraft a year, but will have to produce four rockets a year now. The demand for Progress cargo spacecrafts has also increased. Russia also plans to launch two minor research modules to the ISS. It is obviously a positive factor that Russian space enterprises have so many orders to work with, but they are all projects of the past, not of the future.

Russia has made several presentations of its new spacecraft at various shows, but did not make any steps further. It transpired that Russia’s state-of-the-art spacecraft bears a striking resemblance to the USA’s Orion. In the USA the new spacecraft has been dubbed as “Orion-like”.

Russia will have to develop a unique project of its own to be able to leave the Americans behind in the space race. Russia has been working on the Martian mission project for more than thirty years already. Such a project is very expensive, of course, but, above all, this project requires ambitions.