American Dennis Hope has become the biggest land-owner in our planetary system after he saw the moon shining above his head. He sells pieces of land overlooking the Earth. 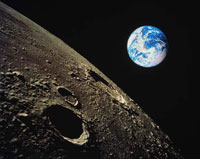 All those lands are sold by the man who performed the grandest appropriation of land in the history of mankind. He is Dennis M. Hope, an American businessman. He prefers to be called “Head Cheese” as all the American children believe that the Moon is made of cheese.

When Dennis studied 'The Outer Space Treaty' and 'The Moon Agreement' signed by 222 countries in 1967, he noticed that there were no words about the private appropriation of outer space. Having examined the legal acts, Hope detected that 122 countries allowed appropriating and using the unowned lands. Therefore, Dennis drew up the “Declaration of Ownership” in November 1980.

Dennis once told journalists that he forwarded that declaration to the UN but received no answer for 25 years.

As Hope received no objections from the authorities, he quite officially took the possession of the above-mentioned lands.

As soon as all the legal questions were settled, Hope started marketing a new product: extraterrestrial pieces of land. The first week brought the businessmen the income of $6,000. Many companies proposed big money for proprietary rights but Dennis was sure of his business success and rejected the proposals. He was sued several times with a view to take the appropriated lands away, but he managed to win the actions.

According to the recent data, 3.470,072 people possess extraterrestrial lands. Hope’s pieces of land are sold in 180 countries. The list of the Moon land proprietors includes US presidents, 6 royal families and 453 celebrities, Hope told journalists.

For the time being, a buyer receives a standard set of documents: a land ownership document, a map of the piece of land location and a copy of the “Lunar Constitution.”

Hope sells pieces of land on the visible part of the Moon as of yet. Those lands are more merchantable. Firstly it is much easier to observe them from Earth, and the buyer can always show them to someone else. Secondly, the idea to possess a piece of land overlooking the Earth is more attractive.