US private space company launches its first satellite into space

US private company SpaceX became the first non-state organization, which managed to launch a satellite into near-earth orbit, Space.com reports. 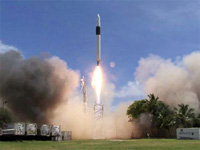 US private space company launches its first satellite into space

The Falcon 1 booster rocket, designed by the company, blasted off with Malaysian Razaksat spacecraft on board on July 14 in the morning. The rocket was originally supposed to be launched on April 21, 2009 , but the launch was delayed over the apprehension that the rocket and the satellite would be technically incompatible. Specialists feared that the satellite could be damaged during the launch inside the rocket, where it was installed. However, the launch did not result in such problems.

The new satellite was launched to monitor the planet’s surface from space. The spacecraft will be used by both civil and military specialists of Malaysia.

SpaceX, or Space Exploration Technology, is one of the world’s largest companies dealing with the development of its own booster rockets. The Falcon 1 rocket, which was used to launch the above-mentioned satellite, is the lightest rockets, which the company currently designs.

The rocket was successfully tested in August of 2008, although the company conducted three tests before – all of them ended unsuccessfully.

SpaceX won the 3.5-billion-dollar tender in December of 2008 to deliver cargoes to the International Space Station after NASA decided to scrap up the space shuttle program.

In the meantime, Russia dumped its Progress M-02M space booster in the Pacific Ocean, Interfax reports.

The debris of the booster rocket sank in the safe area of the ocean, about 3,000 kilometers off New Zealand’s Wellington. There was garbage and outdated equipment on board the rocket.