Nokia will unveil its first smartphone on the base of Google Android in September of the current year, Lenta.ru website reports with reference to The Guardian. Nokia’s first Google Android-based device is to be announced at Nokia World conference. The technical details of the new phone are not known yet. 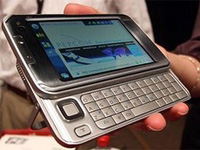 Several producers of cellular phones – LG, Samsung, Motorola and Sony Ericsson, but not Nokia – have announced their plans to make smartphones with Google Android before.

The Google Android platform was installed on the Nokia N810 Internet tablet a year ago. The project was conducted by a group of enthusiasts, who had no connection with Finland’s cell phone giant. They claimed that N810 was running on the Linux system, whereas Google’s OS was based on the Linux kernel.

Google Android, the free mobile platform, was announced in 2007. The first smartphone based on the platform was unveiled on September 23 and came into the market on October 22, 2008. About ten Android-powered smartphones have been announced since then.

Nokia’s cell phones and smartphones are running on Symbian, developed by Symbian Limited – the company which Nokia acquired in December 2008.