Russian internet community learnt about poisonous jellyfish in Moscow ponds yesterday when one of Live Journal bloggers posted the information about it in his blog. 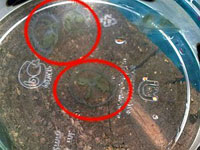 “My daughter has recently asked me whether the jellyfish which lives in our pond (near the village of Spassky, Moscow Region) is dangerous or not. I answered that jellyfish does not live in our pond. Then my daughter brought me a tin with live jellyfish she had caught in the pond! I was shocked!”

However, scientists at the Institute of Evolutionary Morphology and Ecology of Animals were not shocked at all.

"Nothing sensational. Limnetic jellyfish is nothing new to the science. They can be found in South-East Asia. However about five years ago they began to appear in the Volga River. It is still not clear how they managed to get there. However, taking into consideration the fact that the Moskva River flows into the Volga, jellyfish could easily move to the suburbs of Moscow and get into local ponds,” a scientist said.

Scientists say that about twenty years ago jellyfish could not simply exist in Russia's climate zone. However, the average annual temperatures in the European part of Russia rose up to one and a half degrees Celsius. So jellyfish feels quite comfortable in Russia now.