Many studies dedicated to the nature of homosexuality spark criticism all over the world. Public associations of homosexual individuals set out their concerns every time scientists unveil the results of their hard work. Gays and lesbians fear that scientists may start to “cure” them once they discover the truth about homosexuality. Being cured is the last thing that many homosexuals want today. 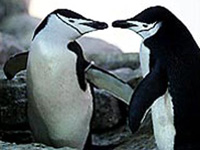 California University professors Dr. Nathan Bailey, an evolutionary biologist, and his colleague, Marlene Zuk, conducted another research about the phenomenon of modern-day homosexuality.

The scientists determined that homosexual relations are widely spread in the natural world. Bailey and Zuk studied the behavior of thousands of creatures in the Animal Kingdom and have not been able to find the species which would practice no homosexuality at all. Giraffes, penguins, frogs, whales, dolphins, snakes, bees, flies, worms, etc – homosexuality occurs everywhere. One may even say that same-sex behavior is one of the most widely spread natural phenomena on Earth.

However, gays and lesbians claim to have a special mentality and spirituality, although the phenomenon has nothing to do with reason. Worms, for example, do not need reason to become homosexual. Consequently, human homosexuality is supposed to be absolutely identical to that in the Animal Kingdom.

Scientists also believe that the phenomenon of bisexuality among humans does not exist at all. Those individuals, who practice sexual relations with both sexes, shall be categorized as homosexual individuals, they say. A person shall be considered as ‘straight’ only if he or she never agrees to indulge into same-sex relationship.

Charles Roselli was criticized for his study of gay sheep when he discovered the difference between the heterosexual and the homosexual brains. Roselli said that those practicing same-sex behavior have a smaller quantity of nerve cells in their hypothalamus. Gays from all over the world showered the scientist with angry criticism claiming that the study was aimed to humiliate them.

Several groups of scientists began to explore the phenomenon of homosexuality last year. Ivanka Savic-Berglund of Stockholm’s Brain Institute in Sweden discovered that the left hemisphere of the brain is larger with gay men. The right hemisphere is predominant with lesbians, which is typical with heterosexual men, she said.

Same-sex behavior is a mysterious factor of evolution. Homosexuality may have its own significance with every species. Penguins and albatrosses, for example, may practice homosexual behavior for the sake of their posterity.

Bailey and Zuk believe that homosexuality is not just a caprice of nature – it is a selective force that affects psychology and conduct. However, modern science is still unable to realize and explain the phenomenon. The only thing that they can say now is that homosexuality appears to be a product of the evolution of nature.