Russian scientists from the Institute of Brain Research managed to prove that every person has conscience. 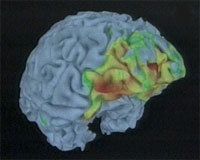 Russian scientists found out that the human brain makes a protest when people tell lies. They also found out that conscience could be observed on a computer screen.

The study showed that there were no unscrupulous people. Every person has conscience. Scientists even managed to see the birth of conscience. The most interesting fact is that the scientists came conscience across incidentally, when studying lies.

Maxim Kireev, a junior scientific employee of the Institute of Brain Research:

“We can compare the brain reaction to telling the truth and telling lies. But we can also compare and intentions of the examinee to tell lies or to tell the truth.

"Even if a person is going to lie, his or her brain is starting to protest at the same time. At this moment conscience wakes up. However, this cannot be seen with the naked eye. The person does not feel any pain, does not sweat and his or her hands do not tremble. The brain protest can be fixed only by a special computer program.”

Svjatoslav Medvedev, the director of the Brain Research Center of the Russian Academy of Sciences:

“There is a mechanism in our brain which informs us that we have done something wrong. This mechanism launches the phenomenon known as remorse. And it is actually our remorse which makes us hate our conscience. That is why a lot of people try to get rid of it. And the most popular and available way to get rid of conscience is alcohol. However, it often happens that remorse becomes much harder during hangovers.”

Andrey Kenig, a trainer at Moscow Center of Linguistic Programming:

“It is necessary to invent some idea for the sake of which conscience will stop torturing you. Well, for example, if I am doing something good to improve the situation in my country I do not feel any remorse about the fact that some other person could potentially suffer from it.”

It is better to say that this case looks like self-suggestion. It is widely applied in armies of many countries. Especially during military operations when innocent civilians can become victims. For example, a US army officials used self-suggestion to make American soldiers not feel any remorse during the war in Iraq. They could easily listen to the cries of a woman who was being raped in the next room and not interfere."

Author`s name Alex Naumov
15:58
Merkel's remarks about Minsk Agreements were 'petty and disgusting' – Lukashenko
15:02
Viktor Bout says he did not come across Russophobia in US prisons
12:02
Massive fire burns OBI hypermarket at Mega Khimki Shopping Mall to the ground
16:48
US basketball player Brittney Griner exchanged for Russian entrepreneur Viktor Bout
16:31
Zelensky believes Ukraine conflict may end in 2023
20:46
The West is expecting, but not pressing Russia-Ukraine talks
18:27
Putin: The threat of the nuclear war is rising, why deny it
17:17
Ukraine modenises Soviet Tu-141 Strizh drones
15:24
Ukrainian combat drones capable of flying at speed of sound may strike Siberia
14:35
Russian Army continues successful offensive in Krasny Lyman direction
Polish writer shocked to find out Russians will not rise to topple Putin