The recent toilet scandal on board the International Space Station became the subject of many news stories all over the world, when US astronauts denied their Russian colleague access to their toilet. What is going on with space toilets in Earth’s orbit? 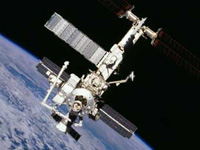 The Russian-made extraterrestrial toilet system does not differ much from its US-made analogue. The system is designed for both men and women. Urine is accumulated in a special reservoir, in which it is concentrated with a special solution. The processed liquid can later be used for technical needs. Nevertheless, there is a certain difference between the Russian and the US space toilets, which most likely became the reason for the toilet scandal in space.

Until recently, Russian cosmonauts and US astronauts did not distinguish between their toilets and used the one that was closer. However, the food, which space researchers eat, differs greatly. The Russian space food is more savoury, more natural and more diverse, which US astronauts acknowledge too.

The menu of the Russian crew has over 300 dishes. Here is the daily menu of Valery Korzun, the commander:

It just so happens that the consistency of fecal matter turns out to be rather thick against the background of such a diet.

The menu of US astronauts is nutritious as well, but it looks more like a diet ration and presumably consists of exotic fruit, vegetables, sea food and low-fat meat. That is why, their waste is much softer. Engineers took account of these peculiarities when designing the sewage system for the ISS. It just so happens that the solid Russian waste ruined the US toilets in space.

The astronauts were sick and tired of toilet breakdowns and unpleasant odors. NASA was eventually forced to order a toilet system from Russia. US tax payers paid $19 million for the space toilet. The new construction was installed in the US department of the ISS.

Russia designs best space toilets in the world. The world-famous mongrel dog, Laika, used the automatic closet in Earth’s orbit in 1957. A special system was designed for the dog to suck her excrement and urine from under the tail. The system was good only for female dogs, which explains why male dogs never had a chance to fly into space.

Yury Gagarin, first man in space, spent only 1 hour and 48 minutes orbiting the planet. A human being can do without toilet for such a short period of time. However, Gagarin had an opportunity to relieve himself in case of emergency on board the spacecraft.

The space experience of USA’s first astronaut, Alan Shepard, was much less pleasant. His flight lasted for only 15 minutes. However, the launch was repeatedly delayed. Alan had to spend several hours in the capsule and urinated into the spacesuit. The next US astronaut had to wear a huge diaper.

USSR’s first orbital toilets were custom-made. Gherman Titov, Andriyan Nikolayev, Pavel Popovich, Valery Bykovsky and Aleksey Leonov had to have their buttocks measured for their personal toilets. A research institute in Moscow still has the bronze toilet bowl, which first woman in space Valentina Tereshkova used.