Earth without people to retrieve its primeval appearance in several weeks 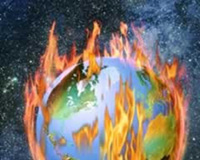 Earth without people to retrieve its primeval appearance in several weeks

According to the documentary, if all human beings disappear, the world will begin plunging into darkness after just in a couple of hours: electric power plants will not be able to generate any light and heat without fuel.

Water will flood the subways of large cities in only two days. All the subways will turn into underground rivers.

All cats and dogs will start dying of hunger in ten days, unless they learn to catch prey.

“This is a very interesting research, although some of its predictions may not be true,” a member of the Russian Academy of Natural Sciences Lev Nikolayev said.

Earth sparkles with trillions of lights at the moment. Ecologists refer to this phenomenon as light contamination. Artificial illumination in several countries can be extremely excessive. Japan, for example, has its entire territory illuminated with artificial light.

Modern buildings were built to serve for at least 60 years (bridges – for 120, dams – for 250 years). All these constructions will become worn out a lot sooner once the prompt care is not provided. Hurricanes, storms and other weather phenomena will accelerate the process.

The town of Pripyat, which was abandoned after the Chernobyl disaster, can be a very good example at this point. The town has changed drastically in only 20 years after the nuclear catastrophe. The roofs of many buildings collapsed, many concrete walls tumbled down too.

All man-made constructions will completely disappear from Earth in several thousand years.

All 430 nuclear power plants, which are currently active all over the world, will explode. However, the consequences of such explosions will not be as terrific as many may think.

The Chernobyl disaster exercised the remarkable ability of the natural world to self-regeneration. Many specialists used to say that there would be a nuclear desert formed in the region adjacent to Chernobyl power plant. However, the local ecosystem is prospering. There are many wolves, boars and other large predators in the region.

Forests will cover 80 percent of the planet’s territory within 50 years. Vegetation will conquer nearly the entire territory in 200 years.

The air will become a lot cleaner in only two or three weeks. However, the enormous quantities of carbon dioxide in the atmosphere will influence the environment for 1,000 years.

All visible vestiges of the human civilization will vanish from the planet in 100,000 years.