There is something wrong with US mission to the Moon. The legendary space mission is still shrouded in mystery. Mankind still has a number of reasons to cast doubt on the miracle of inter-planetary flights. Many people still say that US astronauts have never landed on the Moon. 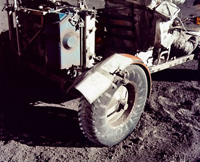 Japan’s Kaguya lunar orbiter took several pictures of the site, where Apollo 15 and Apollo 17 supposedly landed in 1971 and 1972. If the astronauts had ever landed there, they should have left a lot of equipment on the site, including the rovers, on which they traveled on the surface of the Earth’s satellite. The pictures, which the Japanese rover took, showed not even the slightest hint of the US presence on the Moon.

There was only a spot of dust seen on the photograph of the site, from which Apollo-15 blasted off on its journey back to Earth. The spot, NASA said, was a firm evidence of Apollo’s presence on the Moon.

It is an open secret that the Moon’s entire surface is all covered with a thick layer of dust. US astronauts took many pictures of their shoeprints on the Moon’s surface. Joseph Skipper, a researcher of lunar and Martian anomalies, has many questions about the evidence, which the lunar dust provides. A number of images, made by the US astronauts showed their lunar rover standing at a distance from the landing module. There can be no wheel tracks seen on the pictures – as if the rover had flown from the lander to the site where it was photographed.

One may assume that the lunar ground was too hard for the wheel tracks to appear in it. However, there are many shoeprints in the dust around the rover. They can be seen even underneath the rover, although there are no wheel tracks on the ground at all.

Many people say that the US astronauts have never landed on the moon and that the entire mission is a fake. Others say that the missions took place, although the astronauts did not land on the Moon every time they traveled there. They could probably exaggerate their success to baffle the USA ’s major rival in the space race - the USSR.

It is not ruled out, though, that the discovered anomalies can be explained. They can be probably connected with certain peculiarities of the lunar dust and its interaction with electrostatic charges. However, serious scientists prefer not to throw too much light on the subject.