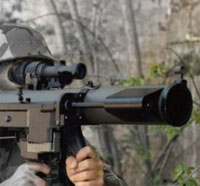 “The first commercial offer to purchase our DP-64 reactive system appeared at the end of last year. We presented it to our potential customers at an international arms show in 1993. The system attracted a lot of interest at that time,” Mr. Korenkov said.

The DP-64 system designed by Bazalt is a grenade launcher that shoots like an assault rifle - it does not produce the jet steam backflash. The system can thus be used both indoors and on vessels: there is no danger that the jet stream could damage topsides.

A grenade launched from the DP-64 is capable of striking underwater saboteurs and all types of light surface targets at a distance of up to 500 meters. A crew can organize the all-round defense of their vessel with the help of the grenade launcher. The weapon can be installed on gun turrets and can be guided through remote control. The grenade launcher is practically noiseless.

The system comes complete with two types of grenades: the signal grenade, which marks the locations of underwater saboteurs, and the blast grenade, which is used to destroy targets. The DP-64 system can also be equipped with non-lethal ammunition to scare off pirates not to let them approach a vessel.

Mr. Korenkov said that the DP-64 grenade launcher did not have analogues in the world. It is an easy-to-handle, safe and effective weapon. Civil weapons equipped with this system will be protected against any pirate attacks.