DNA: the God particle (part I) 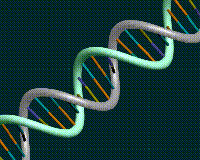 DNA: the God particle (part I)

Is there one thing, one molecule or particle, in the universe that is the most powerful evidence for the existence of God? What about DNA?

The subject of DNA is very much in the headlines and news but very few have bothered to learn or understand just how this amazing molecule works and how it makes us what we are from head to toe. Haven't you ever asked yourself how you got your nose, eyes, ears, fingers, toes, and everything else? How did your DNA bring all this about? Before we answer that question we need to know just a few simple things about DNA. DNA is the abbreviated name for the genetic code and it is exactly that - a code. It is a sequential molecular string of chemical information.

DNA is located in the nucleus of our cells and is made up of various smaller molecules called nucleic acids. These various smaller molecules in our DNA are arranged in an exact sequence, just like the various letters in a sentence. The sequence of these nucleic acids tells the cells in our body how to build our nose, eyes, hands, feet, and everything else. If the sequence for something isn't in our DNA then our bodies won't build it!

There is no law in science or chemistry that nucleic acids have to come together in any particular sequence. Any one kind of nucleic acid can just as easily bond with any other kind. The only reason for why nucleic acids are found in a particular sequence in the DNA of the cells of our bodies is because they are directed to do so by previously existing DNA. When new cells form in our bodies the DNA of the old cells direct the formation of the DNA in the new cells.

The mathematical odds that the sequence of molecules in the DNA of even the simplest form of life coming into existence by chance is comparable to that of a monkey typing the sequence of all the letters and words found in a dictionary by randomly hitting keys on a computer keyboard or typewriter.

If humans must use intelligence to perform genetic engineering, to meaningfully manipulate the genetic code, then what does that say about the origin of the genetic code itself! DNA is truly the God particle. The very sequential structure and code of DNA ultimately points to an intelligent mind behind its origin.

The material our body used to build our nose, eyes, ears, brain, and all of our other tissues, organs and structures, and the material our body uses daily to build new cells to replace the ones that are dying comes from the food we eat. Food is not just for energy. Food is also the "lumber" and "bricks" the body uses to build new cells. When a cell multiplies it makes more cells of the same size. The only way to do this is by getting new material and that new material comes from food.

Think about it! When we were in our mother's womb we started off as a single cell not even weighing an ounce at conception. Eventually we developed arms, hands, legs, feet and organs such as brain, heart, lungs, liver, stomach, until we had a complete body. It's true that the single cell we once were multiplied into many more cells, but where did the material come from for that one cell to multiply into billions of more cells of equal size and eventually making a body weighing several pounds from something that didn't even weigh an ounce in the beginning. The material came from our mother's food.

When food is digested and broken down to its basic amino acids the various amino acids are then rearranged in a certain sequence to form cells that make up the various tissues and organs. What sequence these amino acids come together in is determined by the sequence of the molecules in DNA.

Remember, even after all our organs are formed the cells that make up our organs are continually dying and need to be replaced. Again, the material to make more cells to replace the ones that are dying comes from food.

Contrary to popular public belief about how evolution is supposed to occur, it doesn't matter what the environment is like. If the genetic information for a certain trait or characteristic is not already in the DNA (or genetic code) of a species then there is nothing in the environment that is capable of putting that information there so that the species would develop that particular trait or characteristic. In other words, it doesn't matter how much a lizard may need to fly in order to be able to survive. If the genetic information for feathers and wings are not in the DNA of a lizard then that lizard will never develop feathers and wings.

The sequence in DNA differs from individual to individual and from species to species. For an analogy, think of a library where all the books are in one language. In the library there are books on different topics and subjects. All the books share the same letters from the same alphabet, but the sequence in which these letters are arranged are different from book to book. The sequence of the letters makes the difference between a book on astronomy and a romance novel!

However, an amazing fact of biology is that every cell in your body, except for your reproductive cells, contains the complete information for the whole body. Yet not all the information in the DNA of your cells is allowed to be expressed or translated. For example, a cell from your hair also contains the complete genetic information for your eyes, brain, heart, liver, skin, and all the rest of the various organs and functions of your body (it's because of this that cloning an entire organism from any cell of the body is possible). However, in the hair cells of your body only the genetic information for your hair is allowed to be expressed, while all the other information is literally "blocked off" from being expressed or translated.

Of course, it is good for us that the cells in our bodies were designed this way; otherwise every cell in our bodies would also be everything else at the same time, which would create utter biological chaos. Truly, we may say with the Psalmist that "we are fearfully (or awesomely) and wonderfully made" (Psalm 139:14). Such biological precision in the cells of our bodies is still beyond the full comprehension of modern science. But the fact remains that the more we comprehend or understand the cell and how it functions, the more we must respect the wisdom behind its engineering and design.

When scientists study genes they are studying segments of the DNA molecule. The goal of the human genome project was to locate where the various genes are on the DNA. Only in this way can we begin to understand how to use genetic engineering to correct various genetically caused disorders and maladies. Faulty genes arise from mutations. Mutations are accidental changes in the sequence of the genetic code caused by radiation and other environmental forces.

Because they are accidents in the sequence of the genetic code, almost all mutations are harmful. Even if a good mutation does occur for every good one there will be hundreds of harmful ones with the net effect over time being harmful, if not lethal, to the species as a whole.

Evolutionists hope that with enough time and with enough mutations entirely new genes for new traits will be produced which will be preserved by natural selection leading to the evolution of new biological kinds. There is no evidence that this can happen from accidental changes in the sequence of the genetic code, anymore than it's possible to change a romance novel into a book on astronomy by accidentally changing the sequence of the letters.

At the very best mutations can only produce new varieties of already existing traits, but not entirely new traits. For example, mutations in the gene for human hair may change that gene so that another type of human hair develops but the mutations won't change the gene so that feathers or wings develop!

Almost all biological variations are the result of new combinations of already existing genes and not mutations which, as we have seen, are almost always harmful. The very few mutations that are not harmful never produce increasing genetic complexity. Scientists wouldn't expect earthquakes to produce more complex buildings and, yet, scientists who are evolutionists expect random changes (mutations) in the genetic code caused by radiation and/or chemicals in the environment to produce a human being from a fish over millions of years! There simply is no evidence that random or chance mutations in the genetic code can or will ever produce more complex genes leading to more complex biological traits.

The only evolution in nature that is observable and can be called science is micro-evolution, which is variations within biological kinds such as varieties of dogs, cats, horses and cows.

Macro-evolution, or variations across kinds, is not science but faith.

The genes exist in all species for micro-evolution but not for macro-evolution, and there is no scientific evidence that random genetic mutations caused by natural forces such as radiation can or will generate entirely new genes for entirely new traits for natural selection to act upon.

The author, Babu G. Ranganathan, is an experienced Christian writer. Mr. Ranganathan has his B.A. degree with concentrations in theology and biology. As a religion and science writer he has been recognized in the 24th edition of Marquis Who's Who In The East. The author's website may be accessed at: www.religionscience.com