US scientists at Georgia Tech have learned to use an unusual kind of energy generated by hamsters running in their wheels, British news agencies reported. Scientists put special miniature vests with sensors on the rodents and connected them to a nanogenerator to convert the biomechanical power to electric power. The authors of the experiment say that one of the hamsters generated one-twentieth of the power of a standard AA battery. 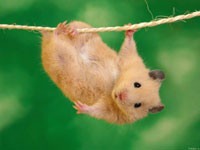 In spite of the fact that the amount of energy received in such an unusual way is very small (a thousand hamsters would be necessary to charge a cell phone), scientist hope that the rodent power will contribute to the studies of the use of human power and the power of large animals.

Lead researcher Zhong Lin Wang said that it was the first-ever demonstration of energy received with the help of animals and a nanodevice. The scientist said that nanotechnologies would soon allow to implant special chips in clothes to capture the energy of a human being.

Nanotechnology, which is sometimes shortened to "Nanotech", refers to a field whose theme is the control of matter on an atomic and molecular scale. Generally nanotechnology deals with structures of the size 100 nanometers or smaller, and involves developing materials or devices within that size.

Nanotechnology is extremely diverse, ranging from novel extensions of conventional device physics, to completely new approaches based upon molecular self-assembly, to developing new materials with dimensions on the nanoscale, even to speculation on whether we can directly control matter on the atomic scale.

There has been much debate on the future of implications of nanotechnology. Nanotechnology has the potential to create many new materials and devices with wide-ranging applications, such as in medicine, electronics, and energy production. On the other hand, nanotechnology raises many of the same issues as with any introduction of new technology, including concerns about the toxicity and environmental impact of nanomaterials, and their potential effects on global economics, as well as speculation about various doomsday scenarios. These concerns have led to a debate among advocacy groups and governments on whether special regulation of nanotechnology is warranted.