Russian and US communication satellites collided in space today at the height of over 800 kilometers above the territory of Russia’s Krasnoyarsk region, an official spokesman for NASA Kelly Hamphries said. The incident occurred Tuesday, February 10, Itar-Tass reports. 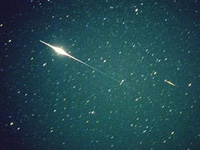 The accident marked the first-ever collision of undamaged spacecraft in orbit. At least two large clouds of debris were formed as a result of the collision. The fragments of the satellites pose no danger to the International Space Station, because the station sits on a lower orbit, NASA officials said.

Russia’s Roscosmos Space Corporation told RIA Novosti that the collision did not result in any losses for the company.

The accident occurred on the altitude used by weather, communication and scientific satellites. The collision did not result in any technical problems for customers, although some of them may experience difficulties in using their cell phones.

The US satellite was launched into space on board a Russian booster rocket in 1997. The Russian craft, which was launched in 1983, stopped operating about five years ago, specialists said.

Orbits of many other satellites will have to be changed to protect them against similar accidents.

Russia’s Cosmos 2251 military communication satellite was not operating for many years. It was living out its days in orbit like many other old satellites.

Cosmos 2251 satellite weighs about 800 kilos. It was used as a communication satellite for military purposes. The satellite lasts for only three years.

Iridium 33/24946 is a commercial communication craft weighing about 700 kilos. It lasts from five to eight years. There were 66 Iridium satellites in near-Earth orbit before the collision. Iridium Holdings LLC will replace the damaged satellite during the upcoming 30 days.

Iridium satellites have been in use since 1989 to provide mobile communication via Iridium satellite phones that cover the planet entirely. The number of Iridium customers amounts to over 330,000.

Iridium telephones are twice as large as conventional cellular phones. Iridium satellites are capable of moving at a very low orbit, unlike other satellites that can operate only on high altitudes.