Why God Didn't Have a Beginning? 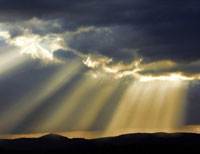 Why God Didn't Have a Beginning?

The answer is found in understanding why the universe had to have a beginning. Science supports Einstein's claim that the universe is a closed system. That means it has finite energy. Even though energy cannot be created or destroyed (by any natural processes), over time the useful energy in the universe becomes more and more useless. This is known in science as the Second Law of Thermodynamics. If the universe were eternal then all of the energy would have become totally useless by now and I wouldn't be writing this article and you wouldn't be reading it either!

We know from the First Law of Thermodynamics in science that matter/energy cannot be created from nothing by any natural process. Since the second law teaches us that the universe does not have the ability to have sustained itself from all eternity and first law teaches us that the universe could not have brought itself into existence, the only logical and rational conclusion is that a supernatural power (God) brought the universe into existence. Furthermore, the complexity and order in the universe logically points to a supreme mind. Disorder in the universe is because of chance but the high degree of order can only be rationally explained due to a supreme mind or intelligence.

Natural laws may explain how the order in the universe operates, but mere undirected natural laws are insufficient to explain the origin of that order. Even in life, once there is a complete and living cell then the code and mechanisms exist to direct the formation of more cells. The problem is how did life come about when there was no already existing directing code and mechanism in nature.

And what about the stars? Oh, yes, gravity may explain how the order found in the precise courses of trillions of stars is maintained, but gravity cannot explain the origin of that order!

Ultimately, however, scientists concede that the Second Law of Thermodynamics will conquer the entire universe and the universe, if left to itself, will end in what scientists predict will be a heat death because all of the energy in the universe will reach a uniform state where no more work of any kind will be possible. Even a contracting and expanding universe would no longer be possible in such a state. This proves, as mentioned earlier, that the universe could not be eternal or otherwise it would have long ago reached this point of uniform energy decay or level.

All of this simply supports the belief that an intelligent power outside of nature and the universe was responsible for its origin and order.

Science cannot prove that we came about by creation or by chance processes, but educators and students should be free to investigate and make up their own minds as to which position the scientific evidence best supports.

Belief in neither chance origins nor creation is necessary to the actual study of science itself. One can understand the human body and become a first class surgeon regardless of whether he or she believes the human body is the result of the chance forces of Nature or of a Supreme Designer.