Many respectable scientists all over the world believe that there is not too much time left to wait for the moment when fresh water, not oil, becomes most expensive substance on Earth. 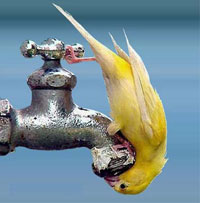 About 1.1 billion people living on the globe already suffer from a serious lack of fresh water. By 2025 this number will increase to three billion – over 40 percent of the entire population.

Director of the Institute of Water Problems of the Russian Academy of Sciences, Viktor Danilov-Danilyan, believes that it is easy to predict the time when the global water crisis is going to hit the planet.

The current growth of population automatically leads to the growing consumption of water. The amount of economically available water decreases. The crisis will thus occur during 2025-2030. About a half of world’s population will face a serious shortage of water.

All modern technologies pump water through systems of pipes and pollute about a half of available fresh water. About hundreds of cubic kilometers of water are lost every year in the world for good.

Industries consume enormous amounts of water. A heat and power plant with the output of one million kilowatts, for example, consumes about one cubic meter of water a year. About one-third of this amount is used irretrievably. A nuclear power plant of the same output needs not less than 1.6 cubic kilometers of water.

The global water crisis will hit Africa, the Middle East, South and South-East Asia first and foremost. Two most populated countries on the globe – China and India – will start suffering from the lack of water too, despite their natural fresh water reserves.

There are several countries which have abundant water reserves: Brazil, Russia, Canada and Australia. It is not ruled out that China, which borders on Russia, will release a statement someday claiming that Russia needs to share its excessive water reserves with other countries. Russia and other countries that may find themselves in a similar situation already need to sign special agreements on the use of water resources.

Sooner or later people will learn to take care of water. Scientists already work on a number of projects to transport icebergs from Antarctica to Arabian Peninsula. Arab sheikhs invest their petrodollars in desalination of sea water, which is a very expensive technology. Therefore, they will have enough money to deliver icebergs from Antarctica. It is worthy of note that Canada already uses icebergs from Greenland to make drinking water.