Russia determined to retaliate if other nations deploy weapons in space

Russia is ready to take appropriate measures if weapons are deployed in space, the commander of the Russian Space Forces said Thursday. 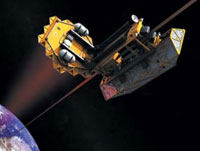 Russia determined to retaliate if other nations deploy weapons in space

"Should any country deploy weapons in space, then the laws of armed warfare are such that retaliatory weapons are certain to appear," Col. Gen. Vladimir Popovkin said.

He said Russia and China have drafted an international declaration on the non-deployment of weapons in space and sent it to the UN.

"It is necessary to establish the rules of the game in space," he said, adding that the deployment of weapons in space could have unpredictable consequences, since such weapons are "very complex systems."

"A sizable war could break out," the commander said.

He said space must not be the sphere of interests of any one country.

U.S. President George W. Bush signed an order last year tacitly asserting the U.S. right to space weapons and opposing the development of treaties or other measures restricting them.

Bush also had pushed an ambitious program for space-based missile defense, and the Pentagon is working on missiles, ground lasers and other technology to shoot down satellites, the AP reports.

"Discussions are on for possible cooperation with ISRO on missions to the moon and Mars," Perminov said. He said a special meeting of officials of space agencies from the two countries will be held in November to take the discussions forward.

India is launching its lunar mission 'Chandrayaan-I' next year and is expected to announce Chandrayaan-II soon after.

"International scientific community is keen to partner with India in Chandrayaan-II," a senior ISRO official said. Under the India-Russia joint space programme, the two countries would launch a research satellite constructed by students early next year.

Indian students are building the satellite, called Youth Sat, while Russian students are constructing scientific instruments for the mission, which will study the earth's upper atmosphere.

Under the Indo-Russia joint project CORONAS-PHOTON, the Tata Institute of Fundamental Research will supply a low-energy gamma-ray telescope for a Russian spacecraft that will be launched before mid-2008 to study solar physics.

Discussions were also held to explore the possibility of India launching the Russian GLONASS-M satellites from its GSLV platforms and join Russia in developing the next generation GLONASS-K satellites for the Russian global navigation system, hindu.com reports.