These days one can see a well-publicized picture of Ernesto “Che” Guevara on a wide variety of articles e.g. T-shirts, bags, toiletries. An invariably bearded face and a black beret of the legendary hero of the Cuban Revolution even grace some expensive brands of alcoholic beverages. Now Russia’s Communists have something to be proud of too. They announced that the Communist Party of the Russian Federation (CPRF) would use the images of Che Guevara, Fidel Castro, Hugo Chavez and Alexander Lukashenko as its main propaganda symbols in the forthcoming parliamentary election. 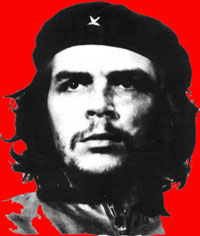 Gennady Zyuganov, head of the Russian Communists, referred to the “reddening of Latin America” when asked recently about the use of the above images for agitation and propaganda purposes during the election campaign. He said that the Communists would use anybody who “fought for the ideals of justice.” Zyuganov also informed that the CPRF was already actively cooperating with Venezuela’s president Hugo Chavez and some members of Mexican Parliament.

“We will use their images in our campaign without breaking the law. Incidentally, we already got Lukashenko’s blessing for the plan. Those who’re trying to poke fun at the issue or quibble about some legal aspects of it are simply wasting their time,” said Ivan Melnikov, Zyuganov’s first deputy who supervises the Communists’ election campaign.

As regards those who “fought for the ideals of justice,” it seems quite strange that the CPRF leadership opted to pick the images totally unrelated to the Russian revolutionary tradition. Looks like today’s Communists are set to equate themselves with the popular personalities of Latin America, which is turning increasingly leftist. Moreover, the Communists are poised to make good use of those personalities to score a success with the Russian voters in the forthcoming election for the State Duma.

We may as well ask a simple question: Where on earth are the heroes of Russia’s Great October Revolution and the Civil War? Where are Vasily Chapayev, Semion Budionny, Mikhail Frunze, to name just the few? It stands to reason that those who consider themselves heirs to the Bolshevist Party should use the above names or images, for that matter, in their war dance. However, the Communist Party’s spin doctors are trying hard to stay in step these days. Apparently, they dumped the “authentic” Soviet-era idols in favor of a different kind of well-publicized political labels, which are mostly American in nature.

The Russian Communists just love talking at length about their utter respect for the continuity of the revolutionary tradition etc. In actuality, they prefer the guy who puffs on his cigar – a well-publicized image of Che Guevara, the hero of the Cuban Revolution. Despite the fact that the Che Guevara myth has little to do with a real person who was killed in Bolivia while fighting for the ideals of a socialist revolution, Che has become a brand that sells well in the West.

The “Che” brand has long ceased to represent the ideals of revolution and the fight for Communism. Yet it sells like hot cakes all over the world. Those who exploit the symbols of the Cuban Revolution make up a rather motley crowd: antiglobalists, anarchists, metrosexuals and gay activists.

Meanwhile, some experts are not as optimistic as the CPRF leaders are with regard to potential benefits the Communists could gain from the use of the popular images of Castro, Chavez and Che Guevara during the election campaign.

Now the opponents of “Reds” can easily accuse the CPRF of betraying the glorious legacy of Bolshevism. They can also accuse the Communists of carrying out a plan to deliberately let the heroesof theRussianRevolution sink into oblivion. One can be under the impression that the Communists have actually traded the Russian revolutionaries for the popular fetishes of the Western world. A number of patriotic organizations were reportedly bewildered by the latest upgrade of the party’s “product spectrum.” Left-wing activists cannot understand why the Party leaders decided to file and forget the heroes of the 1917 Revolution and capitalize on the images normally promoted by radicals in the West.

The CPRF leadership also reneged on the promises solemnly made during the so-called “Russian plenum” of the Central Committee of the Russian Communist Party. The assembly, which was held in March this year, came as a shock for many “internationalists” following the long-winged rhetoric used by the party bosses who expressed their readiness to take up arms and protect the Russian culture and history. On the other hand, the speeches found favors with some of the patriotically oriented voters. Having embraced the latest trends of the political fashion, the Central Committee effectively backed out of its election campaign promises – to protect Russian culture and traditions.

A lack of charismatic leaders among the Communists is another reason that prompted them to shift to propaganda paraphernalia which are mostly associated with Western culture. “In a sense, this decision indicates a lack of confidence of the party leadership in its own abilities. In its turn, the lack of confidence stems from the party’s staffing policy, which is not flexible enough, as far as I’m concerned,” said Ilya Konstantinov, a political scientist.

“The Communists are trying to send a message to the general public, their propaganda efforts are not designed for scholars involved in the study of Marxism. The rank and file have a very vague notion of the revolutionary traditions, whereas they are well-aware of Fidel Castro and Hugo Chavez, the two outspoken leaders who level their harsh criticism at U.S. policies on a regular basis,” said Alexander Konovalov, head of the Institute of Strategic Assessments.

However, the lack of prominent figures on the Communists’ list of candidates is only part of the problem. The Nobel Prize Winner Zhores Alferov and Soviet-era woman cosmonaut Svetlana Savitskaya are still on the party ticket. In any case, the Communists are going to use the names for propaganda purposes during the elections. But the problem is more complex that it seems. Since day one of its existence the CPRF has virtually done nothing to stop the destruction of all the good things handed down from the Soviet era. The Communists would either watch the Soviet legacy going to rack and ruin or let the other political forces take it on lease to advantage. For instance, we have to admit that United Russia was smart enough to make good use of the Soviet-era optimistic slogans and patriotic rhetoric.

As for the heroes of the October Revolution, those have been long shelved by the party bosses. The Communists got used to living a bourgeois “lifestyle.” No wonder they got rid of Lenin and Marx when it comes to the CPRF election program. Time will tell whether the bearded revolutionaries from Latin America could help the Russian Communists win a seat or two in the State Duma this December. The newly adopted propaganda tactics may as well backfire and bollix up the campaign. For instance, the tactics may discourage many patriotically oriented voters from casting their ballots for the Communists. No doubt about it, the parliamentary election is of crucial importance for the Communists. And the election is just a few months away.