Russia may soon lose its lead in space exploration. At best, Russia would have to play the role of a regular space “taxi driver,” which renders services to third parties. We can arrive at this sad conclusion by taking a closer look at the latest dismissals and appointments in the top management of Russian aerospace company RSC Energia, which designs Soyuz manned spaceships and Progress carrier rockets. On Tuesday Energia shareholders officially named Vitaly Lopota as the company’s new president. Lopota, a former director of R&D Institute for Robotics and Technical Cybernetics in St. Petersburg, replaces Nikolai Sevastianov. 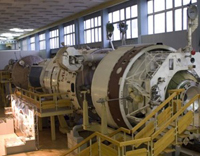 According to some experts, the management reshuffle in Energia may result in changes affecting Russia’s manned space exploration program, which would consequently become more “moderate” and less daring and ambitious. The point is that Sevastianov was fired at the advice of the Russian space agency Roskosmos following serious fallout between the former Energia chief and Roskosmos. “Sevastianov pushed for a program that was unrealistic in terms of Energia’s resources and capacity. His program was not fully coordinated with the federal program for developing Russia’s space industry for 2006-2015,” said a government official when asked about reasons behind Sevastianov’s removal.

On the face of it, the story looks quite clear. However, it is Roskosmos that recommended appointing Sevastianov to the position of president of Energia two years ago. Sevastianov’s program found favors with Roskosmos back then. “The Federal Space Agency has supported the candidacy of Nikolai Sevastianov for president of RSC Energia because his program is the most realistic, feasible and up-to-date program,” said Roskosmos President Anatoly Perminov, speaking to reporters in 2005.

“We would like Energia to become a modern, competitive and financially sustainable company,” Perminov was quoted as saying two years ago. Nowadays, what the situation like in RSC Energia? Did Sevastianov prove to be a lousy top manager? Did he botch it up? On the contrary, he seems to have succeeded in putting the company back on the track. Financial sustainability was a top priority for Energia in 2005. The company was a loss-making enterprise on the verge of bankruptcy. Energia had run up huge debts exceeding 4 billion rubles.

In view of the above, it would be hard to label Sevastianov a bad manager. In other words, Roskosmos played down the real economic success of a company in which the government holds a 38 percent stake. Apparently, the “program differences” between the Energia chief and Roskosmos were more important for the latter.

What are those disagreements? Speaking about his removal from Energia, Sevastianov said that his plans for manned space flights had disagreed with the official position of Roskosmos. “Last year we announced a four-stage program that included manned missions to the Moon and Mars. The majority of specialists backed our program. The missions were high on the agenda in Korolev’s time, so why should not we give it a try these days? Roskosmos believes the projects are far too daring. So we fell into disagreement with regard to the goals of manned space program,” Sevastianov said.

Aside from promoting lunar manned exploration plans, which Roskosmos said should be postponed till the 2020s-2030s, Sevastianov also called for the development of a next-generation manned spacecraft. According to him, the world’s space exploration dynamics clearly indicate that a country which develops state-of-the-art space transportation systems will certainly take the lead in space exploration. Several countries are currently developing space transportation systems, which are bound to replace Soyuz and Progress spacecraft built in the 1960s, in Korolev’s time.

“Russia’s manned space exploration program will cease to exist in some 5-10 years if the situation remains unchanged,” said Sevastianov. He called for the development of the Klipper program (Klipper is a next-generation manned spacecraft designed by RSC Energia). Yet again, Roskosmos had a different opinion on the Klipper program. The agency opened a tender for a new spacecraft but later revoked it. According to Perminov, the new spacecraft program can wait, and the Russian space industry should focus on the modernization of Soyuz spacecraft.

It is quite clear that money is a prime motive for Roskosmos when it comes to planning. The agency has to adjust its plans to the amount of funds allocated by the Russian government for the national space industry. No doubt about it, new spacecraft will cost lots of money to design and build. Therefore, the agency will have to request for more funds and make the costs look reasonable. Agency officials will have to talk government officials into earmarking funds for the new projects. And nobody wants to fight with the government overfunds etc. It is a lot easier to stick to the original plans.

However, there is another point of view. If Russia fails to develop a new spacecraft, Russia may start to lag behind the United States and China in the field of manned space flights as early as 2015, said several Russian space industry experts. For instance, NASA is set to develop Orion, a new spacecraft which should replace the Shuttles by 2014 as the main space vehicle for carrying astronauts and cargo into orbit.

“I would call the situation in Russia’s manned space exploration program a death rattle. We will reach a deadlock if the plans unveiled by Roskosmos go under way,” said Pavel Vinogradov, a Russian cosmonaut. Vinogradov believes it would be inexpedient for the Russian space industry to keep building older Soyuz spacecraft. “We are forced to ensure that the space station is manned by six crewmembers. To do the job, we are supposed to start building more spacecraft, and the Americans insist we build older spaceships because they do not want to fly the modified ones. The United States will build its new booster in 2012, whereas Russia will keep building its older spacecraft, which will be totally useless by then,” added Vinogradov.

Corresponding Member of the Russian Academy of Sciences Grigory Chernyavsky agrees that “Russia’s near-earth manned space program is rather ineffective.” “Russia has become a space ferryman, by and large. We are mostly launching foreign spacecraft into space and transporting space tourists to the ISS,” said Chernyavsky, speaking at an international conference that was recently held in Moscow.

Academician of the Russian Academy of Sciences Boris Chertok, a former colleague of Korolev’s, is fully confident that Russia should go ahead with its lunar exploration program.

“I am certain that a mission to the Moon should be considered a necessary step in space exploration. We need to build a permanent base on the Moon. It is no use going on a sightseeing trip just like the Americans did,” said Chertok. According to him, “the Moon is an unsinkable space aircraft carrier, which could be used for a variety of purposes, including scientific research and defense missions.”

It seems highly unlikely that Roskosmos will be able to restore peace and smooth over the “program differences” between the agency and its opponents by replacing a top manager in Russia’s leading space company. However, it is easy to understand why the company’s shareholders (including the Russian government, a major shareholder of Energia) made a unanimous decision to change the company’s management. The shareholders want the company to make fast profits now. The goal can be fulfilled with the help of older spacecraft used for commercial launches.