Russia and USA compete over the influence on post-Soviet space

The interests of both countries should be taken into consideration for settling the conflict, emotions will not resolve it 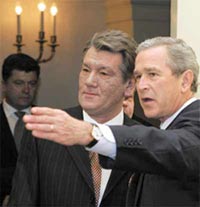 Russia and USA compete over the influence on post-Soviet space

“Moscow's actions seemed to be politically motivated as though Russia was punishing Ukraine for its support to the color revolutions, which are fully supported by the U.S. Administration,” Dimitri Simes, president of the Nixon Center.

A year that has passed since the orange revolution took place in Ukraine was rife with political, economic, and social changes. It was hardly a time of optimism in Ukraine's history, a period that held out any hope of a “bright future” for that country. The political situation on the eve of the presidential election in December 2004 was broken to smithereens. It was a miracle that not a single drop of blood was shed. Restoration of stability will take months if not years to complete.

In fact, it was extremely important for Russia to make sure that those dubbed “the heroes of Independence Square” (in Kiev) were not in power in a neighboring country though it would be a exaggeration to maintain that the Kremlin had played an active role in Ukraine's election campaign. Judging by the tone of the foreign media, the West has not yet forgiven Moscow for showing a considerable interest in a particular outcome of the election.

The number of votes cast for both candidates was more or less equal. The external factor proved to be a decisive one. As a result, a candidate who had been supported by the West for many years won the election in a rather questionable way while a Kremlin-backed candidate had to step back. The loser then agreed to throw in the towel under guarantee of the implementation of a constitutional reform, which partially came into effect on January 1, 2006. The reform is to be implemented in full after the parliamentary election scheduled on March 26. The question is what shape the external factor will take during the upcoming election that may either give a boost to the “conquests of the revolution” or bring out “counterrevolutionary revenge.”

A clash of civilizations?

“Washington always supported the democratic forces all over the world including the former Soviet Union.” Ariel Cohen, the Heritage Foundation

Ariel Cohen, a senior research fellow at the Heritage Foundation, gave an interview to Washington Profile. The interview was posted on the web site of the above organization on November 25, 2005.

One just can not but agree with Dr. Cohen in this case. The conflict is really taking place all over the former Soviet Union. Russia and the U.S. have very little in common in terms of interests. Let us skip Russia's interests for awhile and take another look at America's policies with regard to the new independent states. Let us also touch on some results of those policies.

Can it be that the U.S. administration really knows how to make the whole world happy? Can Russia be a troublesome piece of the Evil Empire, is it simply envious of somebody else's success and does harm to everybody by inertia?

“The inability of both Mr. Yushchenko and his former ally Mrs. Tymoshenko to strengthen the success of the orange revolution was the most amazing event of the last year,” says The Financial Times inits editorial published onJanuary 16.

According to Dmitry Simes, president of the Nixon Center, who spoke with Nezavisimaya Gazeta on January 16, “Ukraine is viewed by the United States as a country that opted for the so-called European Atlantic institutions; a country that chose a democratic way of development during the orange revolution; a country that supported the U.S. actions in Iraq; a country that is an important factor of geopolitical stability in Europe.” Therefore, Ukraine has made the right choice in compliance with Washington's recommendations, and things could only get better for Ukraine.

Another quotation from Dmitry Sime's interview may help explain the reason behind a series of misfortunes that the “important factor of geopolitical stability in Europe” has fallen on. “Many countries of Central Europe are not so keen to share a border with Russia that is getting increasingly stronger and self-confident.” In other words, “many countries” would like to create some kind of a buffer between themselves and Russia. The Anglo-Saxon concept of a “sanitary cordon” falls under a similar category. The United States regards Ukraine and other countries of the “commonwealth of the right choice” as an instrument for exerting influence on Russia. Washington does not show great concern about the fate of the instrument.

As it has been said before, the external factor could be a decisive one in the Ukrainian parliamentary election on March 26. What is Washington is going to do this time around? On the one hand, a total fiasco of Washington's proteges is obvious. Moreover, “today's priorities of the U.S. Administration in the field of national security include Iraq, the fight against the proliferation of weapons of mass destruction, the war on terror, Iran, China, energy, and democratization. The implementation of all these goals save for Iraq requires a stable and good relationship with Russia. No matter how important the U.S. support to the color revolutions in close vicinity to Russia may be, it should not be an influence on the resolution of strategic objectives set by the United States,” as Ariel Cohen put it.

Dr. Cohen also pointed out that making a compromise between the positions of Moscow and Washington in the former Soviet Union is a tough job. Therefore, the U.S. is unlikely to leave Ukraine alone. The Americans will be pursuing the same policy despite the consequences. The president of the Nixon Center Dmitry Simes shares the view: “Washington can appreciate that Yushchenko's position is quite vulnerable. Let us get it straight: the Bush Administration would be disappointed should the followers of Viktor Yanukovich win the parliamentary election. Having said that, I do not suppose that the U.S. government is interfering in the Ukrainian election. However, the U.S. is ready to resist Russia's attempts to influence the results of the election in a way that will be undesirable for the United States.”

The United States is likely to maintain its support to Viktor Yushchenko and his party the Popular Union “Our Ukraine.” It is still unclear what should be done about the changes in the opinion polls results. All the polls indicate that the Yanukovch party is a leader supported by 22% to 31% of voters. The Yulia Tymoshenko bloc and Viktor Yushchenko party are lagging behind the leader (14% to 17%).

Kiev's pro-American orientation can be kept intact only by force and with the help of the external factors. The Ukrainians can only take some comfort by watching things go from bad to worse in Iraq and Afghanistan whose people have also opted for freedom and democracy, according to the U.S. Secretary of State Condoleezza Rice.