To become an oligarch in Russia it is quite enough to seize a business belonging to somebody else and pretend it was always yours. Spending dozens of millions of euros at a resort like Courchevel will guarantee that a man will go down in history. Or get involved into a mess. Unfortunately, neither redistribution of property nor squandering money may help in improving a man’s stained reputation. But a young and promising company Onexim seems to be having a different opinion on the issue. The company wants its chief Mikhail Prokhorov enjoy somebody else’s fame. 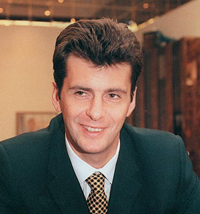 Before January 2007, billionaire Mikhail Prokhorov was known basically to his business colleagues, economics journalists and residents of the Russian city of Norilsk where the businessman was at head of an ore mining and processing company. Russian tabloids and the world mass media focused on the businessman after he was detained in France together with a group of glamorous fashion models. The incident made Mikhail Prokhorov the newsmaker of the month. An anecdote that soon after the incident got spread in Russia said that the Russian TNT TV channel would start a super popular program as some sort of casting for Prokhorov’s next voyage to Courchevel.

When anecdotes about some people appear it means that these people grow popular. But still, it took Prokhorov much time and effort to explain that “after so many years of humiliation and tragedies Russian people have the right for nice and cheerful life”. The oligarch openly said that his job was the most important thing in his life, then followed sports and meals, and girls were the least important component of his life.

Even the rumors about alleged negotiations between Mikhail Prokhorov and Hugh Hefner about probable selling the Playboy magazine to the Russian oligarch could not ruin the playboy image of the Russian oligarch. The first attempt to restore Prokhorov’s image failed but the way it was made seemed quite reasonable. Indeed, if Mikhail Prokhorov purchased the popular male magazine nobody would have ever called him a playboy but treated as a respectable media tycoon.

At the same very period, Mikhail Prokhorov quits the chief position at Norilsk Nickel and becomes the chief of the Onexim group. But Prokhorov seems to be not used to public life and obviously lacks for smart PR-agents as his first independent actions look somewhat strange. Let us take the most recent events.

Soon after Russia triumphantly won the right to host 2014 winter Olympic Games in the city of Sochi, Onexim immediately circulated a press release saying that the company was building the Roza Khutor resort in Sochi, and that it was the company’s management that first estimated that the city had great development prospects. Majority of the Sochi project participants who worked for the triumph in Guatemala just tactfully ignored the demarche. The Roza Khutor company just diplomatically stated that “it had no information about Onxim’s participation in the project for construction of the ski resort”. So, it looks like Onexim’s PR-managers first proclaimed their intentions but have not yet concluded any agreements with the investment object.

And this is not the only confusion about Prokhorov’s large-scale image campaign. A couple of months ago, another pompous statement made on behalf of Prokhorov ended in a confusion. The statement concerned an endowment foundation. In the West, endowment is one of the key instruments for non-governmental financing of universities. Endowments are formed by well-off university graduates, sponsors and other interested persons who invest money in a special investment foundation, and profit received from it is spent on development of some particular university.
At the beginning of the year first endowments appeared in Russia. Most likely, it took Prokhorov’s PR-managers quite a lot of time to realize that the project could be highly promising. As a result, last May Russian mass media reported that billionaire Mikhail Prokhorov founded Russia’s first endowment foundation. The report stated that the idea to found the endowment belonged to Prokhorov. And also, the endowment’s capital made up $8 million, the statement said. Does not it sound really nice? But we should not forget that at least four other endowments were set up before Prokhorov set up his own one. Those previous endowments have much bigger capital than that of Prokhorov.

The St.Petersburg University endowment makes up $150 million. It is also incredible that the idea of forming an endowment could occur only to Prokhorov. It was after the RF Duma passed legislation on target capital that endowments could appear in Russia. Is it another mistake of Prokhorov’s PR agents?

So, the governmental priority spheres of sports and education seem to be among Prokhorov’s top priorities as well. As soon as the government announced creation of a nano-corporation, Mikhail Prokhorov immediately stated that the trend was also a priority for Onexim’s business. The company spoke about hydrogen power engineering. And again, Prokhorov’s business partner Boris Kuzyk insists that the idea of hydrogen power engineering first occurred to Prokhorov. The businessman obviously ignores the fact that some other company, never Onexim, has been introducing hydrogen plants into the Russian market for several years already. It is important for the company to make people hear that Prokhorov has a connection to this very important project.

Some people may say that it is quite natural that first independent steps of the businessman are unsteady as is typical of many businessmen. Once in an interview Prokhorov confessed that being a teenager he was afraid of making acquaintances with girls. The aftereffect of the juvenile complex revealed itself during the scandalous incident in Courchevel. Prokhorov’s 15-year avoidance of publicity may bring similar results. It is highly likely that the playboy may desperately fight for his own moment of glory no matter what instruments are employed for this purpose.