Nuclear industry to put Russia on top of the world

Russia's leadership in the energy field should become the nation's strategy in foreign policy. This role was defined by President Vladimir Putin on the eve of Russia's presidency in the Group of Eight. 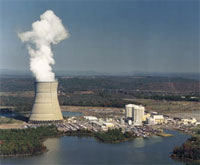 Russia's current status of a major fuel supplier does not let European and post-Soviet countries disregard Russia. However, this influence is not enough to give Russia an opportunity to enjoy the role of the “energy superpower.” The start of the new century was marked with the reduction of power-generating capacities in the country. To make matters worse, the country does not have a thought-out state strategy for the development of the national energy industry. However, observers noticed the launch of new large construction projects and certain important changes in key governmental departments, particularly in the Russian Ministry for Atomic Power.

The ministry is now chaired by the former Prime Minister of the Russian Federation Sergei Kiriyenko. Pravda.Ru decided to discuss the problem of Russia's nuclear future with one of the authors of the Russian Nuclear Doctrine Project, Yury Krupnov.

Personnel changes in the Russian Agency for Atomic Power took place in November of 2005. Sergei Kiriyenko, a well-known Russian politician, became the new chairman of the department. What changes do you think this will entail?

I believe that the Russian nuclear industry will soon undergo positive changes against the background of ongoing changes in the administrative sector of the industry. On the other hand, Russia has lost the priceless 15 years, which other countries used to the utmost. Russia, however, still remains the leader on certain positions. This little leadership will become history in only two years if the government does not take serious measures aimed for the development of the nuclear industry. The new year has already been marked as a crucial moment at this point.

Is there a strategy for the development of the nuclear industry?

There is a strategy for the development of the Russian nuclear industry in the first half of the 21st century. The status of this document is not clear. It was reviewed by the government although no approval followed. There is the Russian Energy Strategy embracing the period up to the year 2020. This document was officially approved in August 2003. According to those documents, the output of the electric power generated by nuclear power plants is supposed to double in Russia by 2020. However, it can only be an official declaration, nothing more.

Which are the problems of the “peaceful atom” in Russia today?

As a matter of fact, there is only one problem: the Russian administration has no will in taking resolute and intensive measures for the development of the nuclear industry.

Does the current situation in the Russian nuclear industry match global trends? Are there any similarities or differences?

There are certain similarities indeed. The USA, China, Iran and India have specific decisions for the construction of quite a number of nuclear power plants. Our key competitors have their own nuclear plans developed with great precision.

What is the novelty of the Nuclear Doctrine that was developed under your guidance?

The doctrine offers to think about Russia's capacities and opportunities to become the world's energy superpower No.1. This is the only reasonable and relatively fast geo-economic strategy that Russia may have. This goal can be achieved through the intensive development of the national nuclear industry. The document also specifies the priorities that will help the country fulfill the strategy. The closed nuclear fuel cycle allows to solve the problem of nuclear wastes and solve the problem of nuclear fuel. This method has no alternative. Russia is capable of becoming the world' leader in the production of cheap and limitless power on the base of the closed nuclear fuel cycle.

Russia will be able to become the leading economic superpower in the world if it has the best nuclear industry in the world. The country should have a transnational global corporation, which could be compared with Gazprom in Russia, Areva in France or Westinghouse in the USA.

The doctrine says that the Russian nuclear industry should be based on powerful fast neutron reactors. They would be able to win the majority of tenders for the construction of nuclear power plants in the whole world. The security and capacity of the functioning reactors need to be raised too.

What about the question of private capital in the nuclear industry?

I think that this problem should be solved on the base of partnerships. This is not the most important question to think about at the moment after all. It is far more important for us to think if Russia can use the unique legacy of the Soviet era and create the best nuclear industry in the world. The private capital will have to be attracted for this purpose anyway. The state budget will still be the foundation of this partnership, though. There is no place for stupid miracles here.

Unlike gas-turbine or steam-to-gas plants the nuclear power is ecology-friendly and fuel-independent. The power produced by nuclear plants is the cheapest. Unfortunately, the economy of the nuclear field is very weak.

The crisis of energy has been developing steadily in the world. The global economic system may collapse when the planet runs out of hydrocarbon resources. The extraction of oil will be decreasing all over the world. The transportation of fuel requires considerable investments. It also depends on a variety of external factors. Russia has a perfect chance to become the leading energy superpower in the world. The chance can be missed in just a couple of years.