The head part of the Russian up-to-date Bulava ballistic missile was timely delivered to the Kura range ground in the Kamchatka region. A strategic submarine of Russia's Northern Navy successfully launched the missile from under the sea, Deputy Commander of the Russian Navy, Igor Dygalo said.

”Dmitry Donskoy,” a strategic nuclear cruiser, launched Russia's up-to-date ballistic missile Bulava successfully. The launch was performed from under the water surface in the White Sea and hit a target on the Kura range ground, Interfax reports.

”This is the first underwater launch of the Bulava missile. It is also the second launch of the new missile within the framework of technological tests conducted for the complex. The chairman of the State Committee for technological tests of the Bulava missile complex, Admiral Mikhail Zakharenko, was staying on board the nuclear cruiser during the moment of the launch.

The first launch of the new missile was performed on September 27. R-30 Bulava missile was launched from nuclear submarine Dmitry Donskoy to test the battling and technical capacities of the missile complex of the fourth generation.

Russian Defense Minister Sergei Ivanov stated that the new strategic missile complex Bulava would be added to Russia's military arsenal by the end of 2007. Ivanov said that Russia's nuclear shield required reliable defense under the conditions of market economy. 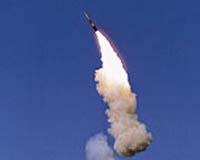 Moscow Heat Engineering Institute. Bulava completed the first stage of launching tests at sea at the end of 2004. The missile complex will be finished during 2006.

Defense Minister Ivanov said that the development of the missile complex Bulava was considered the most perspective direction for the Russian Strategic Missile Troops.

The construction of three up-to-date nuclear cruisers is to be completed in Russia by 2010. The submarines will be outfitted with 12 Bulava missiles.