Russia has practically no chances to participate in Iraqi oil projects

For the time being, US-based companies distribute oil contracts between US-based contractors

Russia's cooperation with Iraq in the field of energy counts many years of history. Soviet specialists started building key objects in Iraqi oil and gas industry in 1967. When the USSR collapsed, and the USA launched the first Gulf War, Russia continued to run cooperation in the fuel and energy complex of Iraq. Russian oil company Zarubezhneft took an active part in the implementation on the Oil for Food Program, buying and selling Iraqi oil, delivering goods and drilling oil wells. Another company, Stroytransgas, signed several contracts to carry out large oil and gas projects in Iraq before the war of 2003. 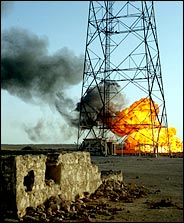 Senior specialist of the Public Relations Center of the Russian Ministry for Industry and Energy, Vasili Osmakov, said in an interview with Pravda.Ru that the oil issue used to be too political back then: “The then Iraqi administration was using the right for the development of new deposits as a tool of political blackmail. The US-led military operation in 2003 cast serious doubts on the implementation of a large number of contracts concluded with the previous Iraqi regime.

The contract to develop the huge deposit known as Western Qurna-2 became the largest agreement on energy cooperation between Russia and Iraq. The document was signed by the Iraqi government and a group of Russian companies in 1997. The contract was drawn up for the period of 23 years and could be prolonged for five more years. Lukoil's share in the contract made up 68.5 percent. The deposit contains about six billion barrels of oil; the investment in the project was evaluated at some $4 billion. The execution of the contract was suspended after the start of the military campaign in Iraq.

Russian and Iraqi officials conduct periodic consultations regarding the fate of Russia's participation in large investment projects to develop oil and gas deposits in Iraq. However, the future of many projects in Iraq's oil and gas industry remains unknown. “All contracts have been suspended. Iraqi officials say that all the questions will be considered after elections and the formation of the Iraqi government. For the time being, nothing has been planned,” Vasili Osmakov said.

It goes without saying that many companies wish to invest considerable funds in the development of Iraqi deposits. The parliamentary elections in Iraq, which took place on December 15, will soon show, which piece of the oil pie will go to Russia. The final election results will be exposed not later than in two weeks. Shiites, Sunnis and Kurds will have to come to a certain agreement to develop a common platform for the new independent Iraq. This seems to be quite unlikely at present.

Russian companies can only take their own efforts in an attempt to improve the situation at least to a certain extent. Russian oil giant Lukoil, for example, organized the program of personnel training for Iraqi specialists in Russia. A spokesperson for Lukoil's press service told Pravda.Ru that the company delivered up to $2 million of humanitarian aid to Iraq in 2005: excavators, loading machines and ambulance vehicles. The volume of deliveries is planned to be increased up to $3 million next year.

Do Russian companies have any chances to participate in the development of Iraqi oil and gas projects? Some specialists believe that many Russian companies will have very good chances to continue working in post-war Iraq. Many objects of the Iraqi oil industry were built according to Russian projects, with the use of Russian equipment, etc. Other specialists are less pessimistic in their forecasts, though. The new Iraqi government, they say, may cancel plans and promises of its predecessors, especially under wartime conditions. Western Qurna is the only big project, which Russian enterprises can count on. It is highly unlikely, though, that the project will be continued.

It is worthy of note that the US administration decided to cooperate with its allies only: an oil company will obtain a contract in Iraq only if it comes from the country, which participated in the military actions against Saddam Hussein's regime.

”We do not give up on the oil projects in Iraq. We are waiting for a certain improvement of the situation in the region. We are certain that everyone should have equal rights to access the Iraqi oil. If a certain country takes an obvious advantage at this point, it will affect Iraq very negatively,” a spokesperson for Russia's SoyuzNefteGaz oil company told Pravda.Ru. For the time being, US-based companies distribute oil contracts between US-based contractors.