It seems that foreign business has finally acknowledged Russia as one of the most perspective countries in terms of investments. The stable macroeconomic situation, high revenues, the growing quality of management and predictable political course allows to envisage political risks. Russia does not have to take immense efforts to beg foreign investors to participate in the national business anymore. Quite on the contrary, the state of affairs in the Russian economy makes them act swiftly not to miss possible earnings. About 60 billion dollars of private capital invested in Russia since the beginning of the current year speaks for itself. 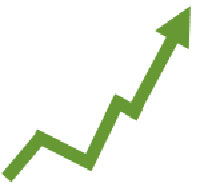 ”Anti-Russian statements from foreign politicians and unflattering economic comments in newspapers cannot conceal the real state of affairs in Russia. Today’s Russia is the new, strong and stable international center of economic and political influence,” Stephen Jennings, the chairman of the Board of Directors of Renaissance Capital, said at a recent press conference yesterday.

A research, which the company made, said that Moscow was going to become one of the key financial centers of the world during the forthcoming ten years. Furthermore, Moscow is expected to become the second most important financial city in Europe after London. Apparently, Western leaders begin to realize the political consequences of Russia’s economic strengthening.

Russia’s rising economy became quite a surprising phenomenon for many foreign observers. Many foreign specialists still think that the rise of Russia poses a threat to the rest of the world. It goes without saying that many Western leaders were concerned about the way Russia retrieved its positions on the international arena. The West did not expect Russia to be back in big politics so soon.

Colin Powell, Former US Secretary of State made his appearance at the above-mentioned conference too. Mr. Powell particularly said that Russia had a right to continue pursuing its goals. “The Russian nation is a great nation which we have to respect,” Powell said. “ Russia needs America . America needs Russia . We want Russia to become a strong and large member of the international community,” the official added.

Specialists say that Russia’s booming economy may help it catch up with China or India in some 20 or 30 years. Experts of the International Monetary Fund say that the Russian economy may grow by seven percent during the current year. However, Russia’s Finance Minister Aleksei Kudrin is more careful with his forecasts – 6.7 percent.

As for reforms, they are more dead than alive. As experience shows, reforms prove to be more successful if they are conducted under complicated economic conditions. Reforms do not make the first priority for the economic development of Russia nowadays. The nation currently deals with the establishment of institutes of development, which include the bank of development, special economic zones, investment funds, venture companies, etc.