The third high ranking commander has left his post. The observers joke about one top general per month. Shortly after the Chief of Arms of the MoD General of the Army Alexei Moskovsky and the head of the department for international cooperation Anatoly Mazurkevich retired, Defense Minister Anatoly Serdyukov appointed a new Commander of the Russian Air Force. The famous and notorious Vladimir Mikhailov has been replaced by the colonel-general Alexander Zelin. Former Commander of the strategic aviation Igor Khvorov headed the General Staff of the Air Force. Simultaneously there have been several more appointments to the positions of the commanders of the branches of the Air Force and its regional divisions. 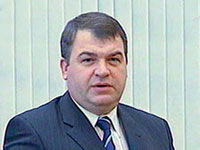 It is interesting to note that simultaneously with the reshuffles in the MoD done by the Minister Serdyukov the President of the Russian Federation Vladimir Putin dismissed a number of so called attached experts. From now on there will be no such experts at all. As a result six high ranking generals lost their “ cozy ” positions of the consultants and advisers to whomsoever.

May it be a coincidence, but all retirements took place after the financial checks of the respective institutions initiated by the new Defense Minister. Even the former Commander of the Air Force, who did really a lot for the development of the Air Force in difficult period, got stained with media’s accusations of the abuse of power. In particular, media rumors that he misused the money earned by the leading Russian aerobatic teams Russian Knights and Strizhi. However, the overwhelming majority of the representatives of the aviation industry positively comment the role of Mikhailov. Indirectly his positive role can be proved by the fact that at the appointment ceremony the new Commander did his best to make clear that he will continue the trends and tasks set by the previous Commander.

It is out of the question to wait for a slow down with the pace of changes in the MoD. There is a whole list of other candidates who are likely to lose their positions shortly. However, it should be stated unreservedly clear that all retirements that took place so far were not followed by court trails or criminal cases. Moreover, some of the retired people can take new important, albeit lower posts.

Coming back to forecasts it is tempting to predict the retirement of the head of the Economics and Finance Service of the MoD Lubov Kudelina. Anatoly Serdyukov is preparing for attributing the functions of the financial control to one of his deputies. He himself has an excellent financial education and he brought number of his former colleagues from the Tax Service to the MoD, who would easily take over the above functions. President Putin already signed the decree providing for the 6 instead of 5 deputies for the Defense Minister.