Austria does not doubt USSR's role in defeat of Nazism 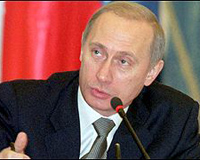 Austria does not doubt USSR's role in defeat of Nazism

Kremlin aide Sergei Prikhodko told reporters ahead of Putin's two-day visit to the Austrian capital that his discussions with the country's leadership would focus on bilateral business ties, but could also address a key defense dispute between Moscow and Central Europe.

"The main focus will be economic and investment cooperation, the implementation of a number of promising joint projects in energy, mechanical engineering, metals and transport," he said.

The talks may address Washington's controversial plans to deploy a missile shield in Central Europe, and relations between Russia and the EU as a whole, the Kremlin aide said.

Putin's visit to Austria is seen by many as an attempt to improve relations with individual European Union nations after the tense May 17-18 talks with German Chancellor Angela Merkel and European Commission President Jose Manuel Barroso near the Volga city of Samara.

The sides had hoped to discuss a new cooperation deal to replace the existing Russia-EU partnership agreement, but negotiations remained blocked by Warsaw's veto over a Russian ban on Polish meat and plant exports. The talks, held against a backdrop of political opposition rallies, also brought up questions over an alleged deterioration of democracy in Russia.

On his Austrian trip, Putin will be accompanied by a delegation of top businessmen, including the head of natural gas giant Gazprom, who is to discuss with Austrian officials long-term contracts for gas supplies from Russia.

According to the Kremlin aide, there are some 1,200 Austrian companies and 500 joint ventures currently operating in Russia, and bilateral trade between the two countries grew 45% in 2006, to $5 billion, rian.ru reports.

The Russian newspaper Kommersant said Monday that Putin's visit was already "tarnished by the scandal over the ORF television interview."

Kommersant said the scandal could hinder Russia's effort to get Austrian backing against an anti-missile system the United States is seeking to install in eastern Europe, strana.ru reports.

The United States claims the system is designed to shoot down missiles from Iran and does not threaten Russia, but Putin still objects to it.

It is well-known that Austria takes the position of neutrality in Europe. However, its neutral position does not prevent Austria from expressing its point of view on the US anti-missile system in Eastern Europe.

Another hot topic is the affair over the radiation poisoning last year in London of former security services officer and Russian opposition figure Alexander Litvinenko, who in a posthumous letter blamed Putin for his death.