Today, on May 22nd, the military exhibition MILEX-2007 opens in Minsk, Belarus. After Rosoboronexport ignored similar exhibition in the Czech town of Brno, large-scale participation of Russian defense enterprises in MLEX gets special value. Recently serious Russian sources refer to the Belarusian defense sector exclusively in a positive context. There are a number of objective reasons for that. In many post-soviet republics people can’t help surprising that the enlisted service in Belarus is considered if not prestigious then at least necessary. In Some high-ranking managers of the Russian defense enterprises say that the State Military-Industrial Committee of Belarus is the kind of integration and management which is being restored in Russia with great pains. 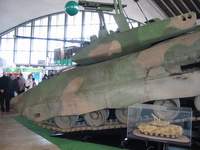 It would be as wrong to compare MILIEX with such giants as IDEX or MAKS as it wrong to compare Belarus with Russia or UAE. Usually MILEX hosts over a hundred participants. Naturally, the majority comes from Belarus, Russia and the Ukraine. The number of foreign visitors / participants is constantly growing, but remains relatively limited. The main exhibitors of the expo are Ministry of Industry of Belarus, several world-known local companies, Ukrainian defense enterprises and, of course, Russia’s Rosoboronexport, whose presence alone makes an event serious. Such regional exhibitions as MILEX have their certain regional role. Every regional market of arms has its peculiarities, and regional expos, certainly, are the best place to focus on them. Another important point is that regional designers and manufacturers avoid huge financial costs of taking their products far abroad. After the precedent of closing down Iranian stand at the exhibition in Brazil under the US pressure earlier this year regional exhibitions can be also viewed as a safer place for everybody, not just for those who got a nod from Uncle Sam.

Technologically Belarusian defense industry is tightly linked to the Russian partners due to the soviet heritage. Much of the inputs of the local defense goods come from Russia. Another principle consideration is that local industry makes few “final products”. Therefore much of what it is made in Belarus is used by Russian manufacturers as components. Two countries have huge joint projects. Inter-State financial-industrial group Oboronitelnye Sistemy (Defense Systems), comprising Russian and Belarusian companies and design bureaus, suggest the upgrade version of the S-125 air defense system, used by dozens of countries in all regions. The same group has very serious role in the development of the newest Russian air defense systems and aircraft. Now Belarus and Russia are working on the creation of a joint venture which is to service the units of air defense.

There are a number of other examples of joint achievements. The new computer system which is integrated into the newest version of the Russian export T-90S tank was developed by the Belarusian company "Beltech". This system is installed on the tanks delivered to and assembled in India as well as on the tanks demonstrated at the international exhibitions. The system allows for precise fire in complicated conditions, at day time and in the night. Indian manufacturers of Т -90 are going to conclude the direct deal with "Beltech" in order to have direct supplies of the equipment for the Indian tanks. The cost of this deal is evaluated at 110 million Euro. Another Belarusian manufacturer of optics BelOMO is a world-known company. Swedish Army uses aiming devices from BelOMO.

This January Russian Group "GAZ" signed the agreement with Minsk Automobile and Minsk Motor plants (MAZ and MMZ) on joint development and production of engines "Euro-3" and "Euro-4". Investments of the group "GAS" into this project will exceed 10 billion RUB. Group "GAZ" closely cooperates with Belarusian manufacturers. The plant "Autodiesel" belonging to the group for a long time has been delivering engines to MAZ (in 2006 - almost 19 000). MMZ annually buys from another enterprise of GAZ group, Yaroslavl Plant of Diesel Equipment, about 40 000 sets of fuel equipment. Gorki and Pavlovsk Auto plants of the group "GAZ" in return buy engines from MMZ.

Belarus also has noticeable achievements in the international market. Recently Minsk based Plant of Wheeled Tractors (MZKT) signed the contract with the UAE on delivering the world’s heaviest wheeled tractors capable of carrying two tanks or three armoured personnel carriers at a time through desert. MZKT won this contract through a tender, surpassing the manufacturers from Germany, Czech Republics, Sweden, France and other EU countries. Totally 21 tractors with the payload of 130 tons each, as of today having no matches in the world, will be delivered to the UAE despite of the obvious US pressure against the deal.

Noteworthy, the vehicles from MZKT still carry Russian intercontinental missiles. After disintegration of the Soviet Union Russia arranged manufacturing of wheel tractors in Bryansk, except for the heaviest versions (which are necessary for mobile “Topols”). According to some Belarusian sources there are some technological difficulties in Bryansk. Recently KAMAZ declared that it intends to go into the market ofwheel tractors. However, it is likely that it will begin with smaller models too. The way to multi-axis giants will take more than a year.

Belarusian made fighting-reconnaissance vehicle 2M “Stalker” was the hit of the previous exhibitions in Minsk, but also at IDEX. Developed by a private company Minotor Service it is the world’s fasted vehicle in tracks. Most of the inputs, including engine and arms, are Russian made.

Baranovichi based 558 Aviation Repair plant suggested upgrades to Soviet-Russian best selling fighters Mig-29 and Su-27. According to the Belarusian plant that upgrades allowed for setting several new world records, which were duly recorded. 588 Plant claim that the main input which allowed that was the new complex of the engines and systems’ control. However, the representative of the Russian companies interviewed afterwards denied that these records could have an official status.

Belarus has good perspectives in Venezuela. Recently two countries concluded several contracts in the field of military-technical cooperation totally worth a billion dollars. According to the Belarusian sources the agreements with Venezuela will secure long-term orders for many local enterprises. Belarus concluded more than 220 contracts on military-technical cooperation with China, 190 of which were implemented. High-ranking Chinese militaries are frequent visitors to Minsk. Belarus offers to India its knowledge and experience in the sphere of laser-optical technologies, which can be applied both in civil and military spheres, including for making the missiles aiming systems.